This is the contents of an old website www.prefabsareforpeople.org.uk. 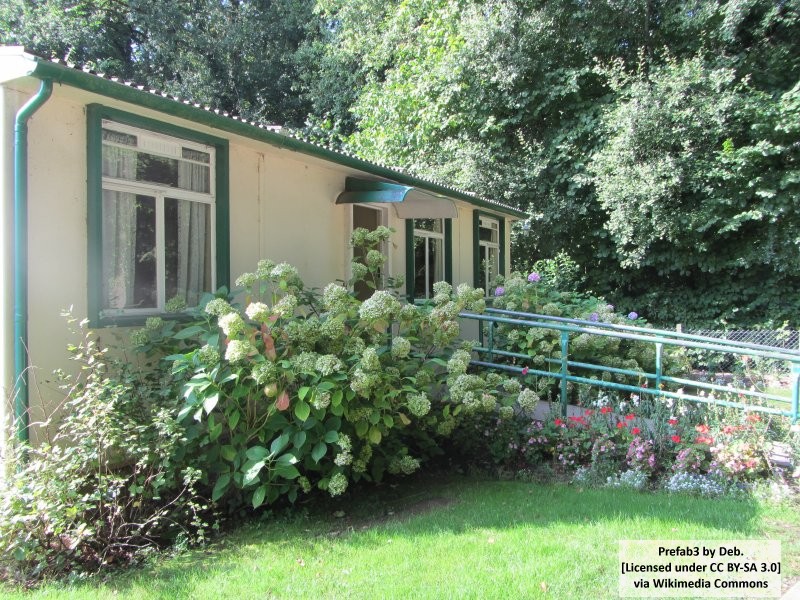 Prefabs are for People.

Here is an initial statement of the objectives of www.prefabsareforpeople.org.uk.

Prefabs, the “temporary” homes built after the World Wars of the twentieth century, were one of the great housing successes in the past 100 years. They were meant to last 5 or 10 years but some have lasted 60 years. But the big story is that the residents liked them. See, for example, Wolverhampton History and Heritage Society article on Tarran Bungalows on the East Park Estate.)

It is a great tribute to the original design and building of these houses that, although intended to last for only 10 years, nearly 60 years later their residents are still happy in them.

This is not an isolated case. Many people were happy living on prefab estates. In York there is a waiting list for prefabs built on (or rather delivered to) sites the route of a defunct road scheme. These were actually built in the 1970s. And the Parliamentary Select Committee on Environment, Transport and Regional Affairs found out on a visit to Yorkshire, 3-4 April 2000 that in Leeds :

An area of mid-1940s prefabs originally built with a five-year life span. The Committee was informed that these houses remained very popular with elderly residents.

But, Leeds City Council wants to demolism other prefabs that residents desperately want to keep, some having lived there since. In a report in the Yorkshire Evening Post on 27th September 2003. (found here), Nick Ahad reports the council as saying

The council insists it is required to bring the homes to the Government’s new Decent Homes standard by 2010.

Bizarrely the Decent Homes Standard is part of the ODPM’s “Creating Sustainable Communities” initiative. In this case, of course, destroying sustainable communities.

“We understand the concerns of the community. Everyone will be entitled to compensation.”

But what how much will the compensation be for the loss of good friends and neighbours and a “Sustainable Community”.

Multi-storey flats were not for people

The multistorey blocks of the late 1960’s were, however, meant to be permanent homes. Many of them, such as the Hunslet Grange flats in South Leeds only lasted to the 1980’s. (See, for example, Leeds Risky Homes: Two Case Studies in Time

Hunslet Grange or Leek Street Flats was a system built flat and maisonette complex built in South Leeds in 1968. It outline design was developed by the Yorkshire Development Group which was design and sponsoring consortium created by Leeds, Sheffield, Nottingham and Hull local authorities.

In common with other system built blocks Hunslet Grange developed problems with structural stability and water penetration leading to damp and condensation and prohibitively high fuel costs for tenants. Following a series of residents’ campaigns the complex was demolished in 1983.

Even developments of multistorey blocks less troubled by construction problems have been given up as a bad job.

The last remaining symbol of Chalkhill Housing Estate came tumbling down on 24 July 2002, when the Leader of the Council, Ann John pressed the button.

The design of the walkway blocks was based on that of Park Hill in Sheffield and was built in several phases between 1966 and 1970.

In 1980’s, widespread concern about the conditions on the estate led to a number of initiatives that included door entry systems and walkway closures. These were implemented in three phases from 1987 and were funded through the government’s ‘Estate Action’ programme.

Although beneficial in terms of security, this programme did nothing to repair the defects in the blocks, renew the worn out services or modernise the interiors of the flats (See www.brent.gov.uk/chalkhill.nsf)

Evidence based planning? Any research on the social environment of prefabs? A small prize.

Poverty does make people miserable. But once people are removed from poverty and are simply poor, the most important aspect of their lives is their friends and neighbours. (See “The Loss of Happiness in Market Democracies” by Robert E. Lane, Yale University Press. Found here)

It would seem sensible that planners, in the field of housing especially, would be interested to know which forms of housing had happy residents and which did not. PrefabsAreForPeople is offering a prize of a bottle of Bollinger to any planner (or architect) who can show there is some good quantitive research on the social environment of housing forms, especially prefabs.

Our anecdotal evidence is that most people were happy living in prefabs prefab estates were and are happy places. As the piece in that Yorkshire Evening Post on the Robin Hood prefab estate between Leeds and Wakefield says

Another resident, Ms Robshaw, 62, who uses a wheelchair, said: “We have a lovely community where everyone gets on well. “Why should they be torn down?”

Is the government warming to prefabs?

One interseting development that the planners at the ODPM are embracing prefabrication. According to a report in the Property People:

Deputy Prime Minister John Prescott told 1,600 delegates at last week’s Urban Summit, that all future housing developments in the South East would have to build to at least 30 homes per hectare from now on. The average for the region is currently 20 per hectare, compared to more than 50 in Islington, 80 in Greenwich Millennium Village, 250 in Edinburgh and 400 in Barcelona.

He said the UK should strive to match America and Europe in producing prefabs and should be aiming to give people a good quality of life, rather than just think about building houses.

Campaigners at the Council for the Protection of Rural England said they were deeply disappointed and puzzled that the new density would only be applied to the South East.

Sprawling, land-wasting housing estates2 are a problem everywhere, both in town and country, said its policy director Neil Sinden.

Sad to say the ODPM’s interest in prefabrication seems not to be a recognition of the success of the prefabs of the 1940’s (or even Walter Segal’s elegant designs) but for high-density “prefab flats” – reminiscent of the horrors of the flats built in the sixties and seventies which were knocked down in disgust in the eighties and nineties.

2 “Sprawling, land-wasting housing estates” are not always the problem. As Dr Keith Porter of English Nature said at the British Association last year, low-density developments with gardens and public open spaces would provide more favorable habitats for species than the giant pesticide-treated cereal fields that dominate much of the countryside now. Greening the greenbelt explores these issues.