“Everybody knows that but …” says Jonathan 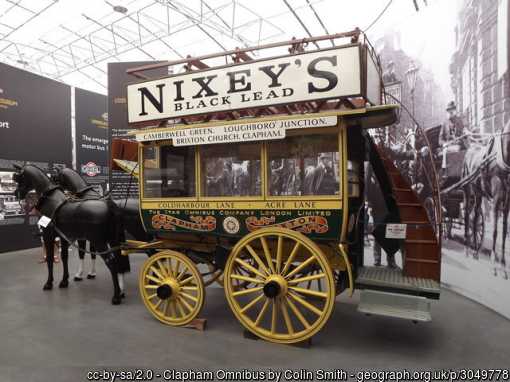 I enjoy the view from the top of the Clapham Omnibus.

I’m in the middle of writing a piece on Green Settlements and just realised that some of the argument is driven by the urgency of climate change but the mainstream media and many scientists – who tend to be media favorites – won’t tell us the awful truth. Politicians speak to issues that they hear on the doorstep or get from focus groups – focus groups that will be unaware of the urgency.

This is a placeholder for a more considered piece – If I ever get around to it.

I hope this isn’t opinionated waffle. That’s OK for those with credibility but has less weight coming from me as I enjoy my ride on the Clapham Omnibus.

My experience is a bit different but has the same flavour. I do less now but I used to catch politicians, policy makers, scientists and media people quite often – attending lots of meetings and following up with correspondence. Trying to squeeze answers out of them was hard but sometimes had a bit of a result.

Four samples of these engagements:

In 2007 I wrote to several people about the rate of climate change and feedbacks from Siberian tundra. A note I attached is an Appendix. I also wrote to a BBC correspondent, showing the progression of the estimates of the year that Arctic Ice will disappear at the end of the melting season:

As you can see from my note I am worried about the
state of climate modelling. One conclusion I have
provisionally drawn is that because IPCC AR4 has
not modelled some of the known positive feedbacks
its predictions are underestimates…

I corresponded with Professor David Macay, Chief Scientist at the Department of Energy and Climate Change. I asked

Should assigning non-zero probabilities to feedbacks
missing from climate models wait until climate modellers
have incorporated them into the models?

Were these feedbacks ignored? The first estimates of remaining carbon budgets that take account of the important missing feedbacks (those that are known unknowns) seems to be the recent paper by Lowe & Bernie in 2018. See below.

I was also party to some correspondence before the Parliamentary Office of Science and Technology produced PostNote 454, Risks from climate feedbacks in 2014. One email from the Met Office contained:

Burke et al. (2013b) looked at the CMIP5 models used for the IPCC AR5 report. They suggest that including permafrost carbon within climate models will lead to an increase in the positive global carbon climate feedback. In addition, under future climate change the northern high latitudes may well become a source of carbon.

Some commentators suggest the uncertainties in our knowledge of carbon cycle and physical feedbacks may mean the Earth will warm faster than models currently estimate.”

“Some commentators suggest” is rather cautious – but not unexpected.

In 2016 I got scientists at DECC to state their position on the missing feedbacks in climate models. They answered:

The following is from my piece Cheating with temperature:

The table below gives estimates for the remaining carbon budget, using figures collected in the Carbon Brief article, Analysis: How much ‘carbon budget’ is left to limit global warming to 1.5C?. The figures are for a 66% chance of keeping below 1.5°C.

These are remaining carbon budgets are given in billion tonnes of CO2 (GtCO2) and converted to CO2e by a factor in line with the CO2e/CO2 ratio in UK national statistics, Greenhouse gas emissions in 2013. (CO2e figures are 18% higher than CO2 ones.) The last column scales the figures down by the current world population of 7.6 billion.

The differences in results in the first two rows are largely due to differences in the method of calculating the average global temperature. (Millar et al. used HADCRUT4. Tokarska & Gillett used a temperature measure that was globally-representative). However, these two results are from models that do not include some important climate feedbacks, such as carbon released by thawing permafrost or methane production from wetlands, as a result of climate change. These are taken into account in the last row based on modelling by Lowe & Bernie. Carbon Brief says:

To an amateur outsider on the Clapham Omnibus (me), it is shocking that I have been asking straightforward questions about serious flaws in climate policy making for over a decade – only to be shown that my worries are well founded. I understand that climate modeling is difficult and cannot be certain but the standard response has been: “We can’t be sure”. This leads to “If we’re not sure, we can’t act.” This is why Kevin Anderson’s comments ring true to me: The official climate policy making process does not want to know the awful truth.

The system drags its feet that’s clear. “Why?” is the stuff of conspiracy theories but the new chair of the IPCC was once an economist employed by Exxon.

If you rely on the mainstream reports about the climate, you will eventually find it’s much, much worse than you think.

“The Hadley Centre is currently regarded as a world leading climate modelling centre. No other single body has a comparable breadth of climate change science, data analysis and modelling, or has made the same contribution to global climate science and current knowledge.”

The following, mostly extracts from emails I have received, does not contest this finding. But it shows that the best climate science available has not advanced sufficiently to match the urgency of the climate change.

Methane from the Siberian tundra

Professor John Mitchell, Chief Scientist, Met Office, replied to an email, in which I asked about the global warming caused by methane from the Siberian tundra. He said (30 Apr 2007)

“The CH4 (and CO2) permafrost feedback isn't included in current EarthSystemModels and it is potentially large but no-one really knows. I think the community has been a bit slow to take up on this feedback because of the lack of data.”

(I understand the IPCC's Fourth Assessment report relies heavily on modelling from the Met Office Hadley Centre and does not include this feedback.)

Since then I have had several email exchanges on the subject. The clearest response is from Angela Venters of the Transdepartmental Science and Technology Group, who was asked to respond to an email I sent to Sir David King. She said (1 Jun 2007):

The feedback loop where climate change leads to melting of the permafrost, such as in the Siberian peat bog, which itself increases the intensity of climate change by releasing methane is an important area of current research and an issue which Sir David is aware of. This feedback loop is likely to have a significant impact on climate change; scientists at the Hadley Centre for Climate Prediction and Research (Met Office) have calculated that, if the observed melting continues over the next 100 years, the rate of global warming could increase by 10% to 25%.

Understanding the likelihood and consequences of this type of feedback event is an important area of research. For this reason, developing our knowledge of feedbacks is a significant part of the Defra funded £11 million pa research programme at the Hadley Centre.

I still have a worry about Siberian methane. When attending a meeting of the All Party Parliamentary Climate Change Group, I discovered that the current climate change models do not incorporate any feedback from melting permafrost, particularly in Siberia.

Since then I have had several email exchanges on the subject. The clearest response is from the transdepartmental Science and Technology Group, which states “if the observed melting continues over the next 100 years, the rate of global warming could increase by 10% to 25%.”

The NOAA satellite figures suggest that, this summer and last summer, Sibera has been 3-5 degC warmer than the baseline of 1961 to 1990. Does this mean the effects of Siberian methane will happen sooner than expected?

I also sent this question to Professor Peter Wadhams who replied (22 September 2007):

The current extreme summer retreat is indeed a serious matter. Not only does it set a new record but it exceeds the previous record by more than 1 million sq km. If you look at the graph of annual September minima this marks a sharp departure from the normal rate of retreat and could mark the beginning of some final break-up pattern which will give us a summer ice-free Arctic much earlier than anyone thought. The best place to see all the evidence is the NSIDC website (National Snow and Ice Data Center, Boulder) which is http://nsidc.org. Look for "Arctic Sea Ice News Fall 2007". It shows today's ice limit, the graph of annual decay and how sharply it deviates, and also shows that a large area of Arctic Ocean is now open for the first time since observations began.

Thank you for passing all of this on to a useful person in government,

As well as Siberian methane, there are other possible effects that will cause “feedbacks-on-feedbacks”. For example

- changes in the Earth's albedo due to reduced snow and ice cover; and

- the disappearance of rain forests, especially in the Amazon basin;

It is very worrying to see Professor Wadhams point to methane from gas hydrates. These have been mooted as causes of previous dramatic climate changes leading to extinction events.

It is beginning to be clear that current “official” climate science is seriously underestimating the pace of climate change.

It’s quite impossible for me to take seriously those – Sir Jonathan Porritt for instance – who maintain that pulling back from the brink is compatible with capitalism. I don’t doubt that Porritt knows a great deal more about matters environmental than I do. It’s just that he doesn’t know the first thing about capitalism, whose dependence on relentless growth I recently described as “absolute and non negotiable”.

I dare say bore my friends; dare say they find me reductionist on the point. I offer this analogy. If I am diagnosed with a malignant cancer, offering a 10% chance of my living another year, I’ll be quite fixated on that cancer. It’s not that I believe all my earthly problems are caused by it; just that its existence within my body threatens every one of my aspirations for a worthwhile, fulfilling and happy life.

That’s how I feel about capitalism. The issues discussed here inform one strand of my view; the threat of nuclear armageddon another. And you know what? Both strands are driven by capitalism’s criminally insane addiction to ‘growth’.