The UK will be over 4 times over budget | Brussels Blog 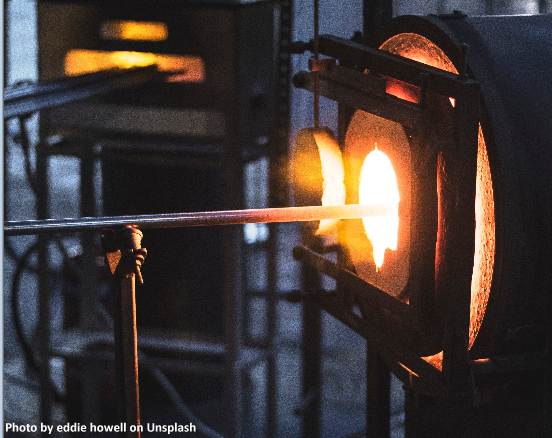 Here is a hopeful looking graph from the paper: 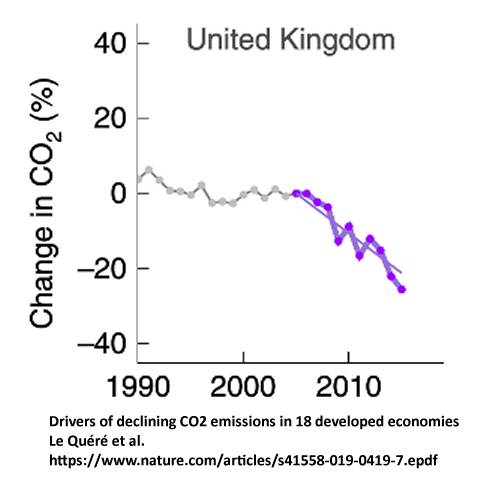 The letter notes that the effects of outsourcing are small:

Outsourcing of emissions through trade was small … and does not account for [a] substantial contribution to CO2 reductions.

This means that, in any given year, if no further manufacturing has been shipped overseas, outsourcing does not cause a further fall in emissions – but, of course, the results of past outsourcing will mean manufactured goods are being imported having created emissions overseas.

The letter does consider consumption emissions in identifying the countries with good records of cutting emissions:

We isolate a ‘peak-and-decline’ group of 18 countries where emissions have significantly decreased over the 2005–2015 period, considering both territorial and consumption emissions

For the UK, the estimates of emissions from the Department of Environment Food and Rural Affairs, present a clearer picture.

Emissions based on UK consumption. 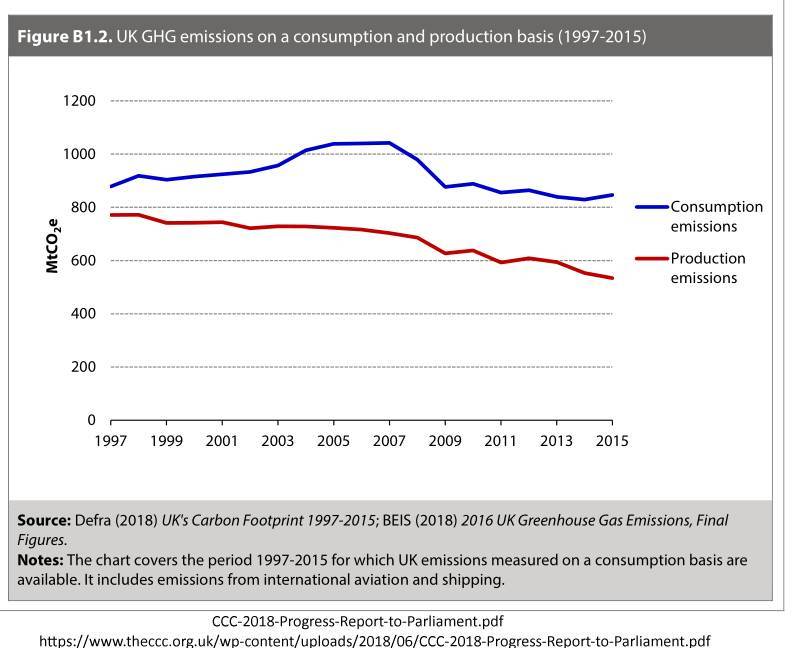 Perhaps 2016 consumption emissions, which are published soon, will show a better trend. In the mean time…

Some crude but simple maths shows the bad news:

Emissions excluding imports & etc. are clearly nonsense. Shut UK’s manufacturing and import the goods and carbon emissions due to production go down. This ignores the emissions caused by making the imports.

So on these estimates we have:

UK humans will emit 246 tonnes CO2e each
against a world budget of 55 tonnes per human.

Note: This  was originally titled “The UK will be over 5 times over budget”. I must be more careful with my spreadsheets.

In a later post Climate destruction 1: Economic Growth, a different source for remaining carbon budgets has been used. This doesn’t make substantial difference to the argument. It emphasises the conflict between controlling emissions and economic growth.

Also worth noting that none of these figure include our share of international aviation or shipping, which is non-trivial (and rising).

Unfortunately these ‘complete emissions’ numbers are harder to come by, but we really should encourage quoting of full-picture numbers, otherwise we are just deceiving ourselves with over-optimistic graphs.

The combination of international transport and consumption numbers puts the UK average closer to 10 tonnes per capita per annum, than the 5-6 tonnes you get from production emissions alone, and not falling very fast either.