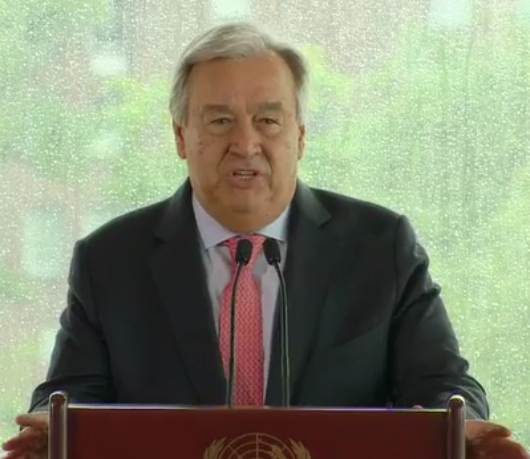 Developments like that proposed for York Central increase this threat and as such are probably illegal.

The set of rules that govern planning in the UK, the National Planning Policy Framework, says we must not ruin the lives of future generations. It refers to a resolution of the United Nations (42/187) and says:

I sometimes wonder if this was meant seriously but it is now the law and it’s quite easy to see that the York Central Development is “compromising the ability of future generations to meet their own needs” because it would create very large emissions of the greenhouse gasses. Such emissions are causing our climate to change to the detriment of future generations. This means according to the NPPF the proposed development is probably illegal. Here are some details…

The remaining carbon budget per human is 57 tonnes CO2e

Scientists make estimates of the quantity of greenhouse gasses that can be emitted before average global temperature rises by 1.5°C since pre-industrial times. This quantity is called the remaining carbon budget for 1.5°C. A temperature rise of 1.5°C is widely regarded as a dangerous threshold to cross.

There are different estimates for this budget but a mid-range figure is 354 billion tonnes of CO2 from the end of 2018. Emit more than that and a much more dangerous phase of climate change is predicted. When converted to Carbon Dioxide Equivalent (CO2e) to account for other greenhouse gasses, this remaining carbon budget is 432 billion tonnes. That is 57 tonnes CO2e for each of the 7.6 billion humans on Earth today.

The housing development at Derwenthorpe is a helpful example to understand the proposed York Central development. Dewenthorpe aimed to enable lifestyles with low carbon emissions. (See Derwenthorpe wins leading industry award for sustainability.) However, research commissioned by the Joseph Rowntree Foundation showed that this failed. Using a sample of 40 households, Derwenthorpe’s carbon emissions were found to average 14.52 tonnes CO2e per resident per year. Emissions on this scale exhaust the 57 tonne budget in less than 4 years, clearly “compromising the ability of future generations to meet their own needs”.

Only one resident in the sample lived in a car-free household. This resident had the lowest carbon footprint of all.

The affluent cause most climate pollution

Another study commissioned by Joseph Rowntree Foundation clearly shows that affluence brings more carbon emissions, particularly from car ownership and international aviation. Here, the Centre for Sustainable Energy looked at the emissions of CO2 by income group and found
very large differences between the lowest 20% of income and the highest 20%, especially for cars and flying:

Household fuel was the largest source of emissions, mostly from heating homes. The top 20% caused 67% more emissions, probably because they lived in bigger homes and had more money to spend on heating. For car use and international aviation the differences are much larger.

Overall emissions of greenhouse gasses have been falling since 1990 due to the phase out of coal  and increased insulation of homes. However, the emissions from transport have not been falling.  A report in The Independent said:

However, critics have accused the transport sector of “failing to play its part” in curbing emissions after they rose by 2 per cent, according to 2016 figures from the Department for Business, Energy and Industrial Strategy (BEIS) – the most recent year for which they are available.

The wealthy have much higher transport emissions than the poor mostly from car use.

Even for one Citroen C1, in its lifetime 42% of the owners personal remaining budget of 57 tonnes of CO2e will be eaten up. That’s just in the first 13.9 years of a budget that’s meant to last another 40 years. Owners of Land Rover Discoveries will be out of their whole budget with their first car: Nothing left for shelter and food.

The proposals for York Central do specify charging points for electric cars, which are widely regarded as the best hope for improving carbon emissions for cars. However, it should be noted that in the important period for global emissions, the next decade or so, the electricity that powers these cars will not be fully decarbonised. In addition, the embodied carbon in their manufacture is larger than that of cars powered by fossil fuels. See the video by Bjorn Lomborg, Do electric cars really help the environment?

Motorists have climate-destroying carbon footprints and they “[compromise] the ability of future generations to meet their own needs” so building new homes for motorists is contrary to the National Planning Policy Framework.

Let’s now discuss the buildings on the proposed development.

The construction industry is responsible for about 10% of UK emissions. These emissions become known as the ’embodied carbon’ in buildings. The emissions caused by construction have not been calculated for York Central, so let’s estimate them here.

According to the York Central Environmental Statement, there will be 379,729 sq metres of floorspace (Gross External Area) in the development. Using a figure of 0.675 tonnes of CO2 per square metre (This is a figure estimated for the ‘low carbon’ development, the Beddington Zero Energy Development, BEDZED. See Embodied carbon recognised at last). The estimate of the embodied carbon in the proposed deveopment is over a quarter of a million tonnes of CO2, as seen in Table 1: 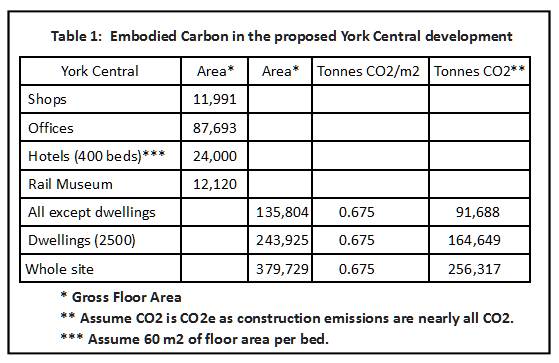 Carbon emissions per resident at the proposed development

Table 1 gives the average embodied carbon in a dwelling on York Central as 66 tonnes CO2. (That’s 164,649 tonnes/2500). With an average occupancy of 2.4 residents per dwelling this is 27 tonnes per resident. That reduces the resident’s remaining carbon budget from 57 tonnes of CO2e to just 30 tonnes.

While 63% may be considered low for a suburban or village development, if this were in London, there would be no provision for cars because of the proximity of a transport hub, in this case York Station. The London Plan specifies car-free development near transport hubs. Its Policy T6(B) says:

The residents of the 1219 households with cars will have greenhouse gas emissions close to the residents of Derwenthorpe. As seen above, after deducting a share of the embodied carbon in their new dwelling they have a remaining carbon budget of 30 tonnes CO2e. Their lifestyle emissions of nearly 15 tonnes CO2e will exceed this in approximately 2 years. They will be “compromising the ability of future generations to meet their own needs”. This means the proposed York Central Development is contrary to the National Planning Policy Framework and that means it is probably  illegal.

Why I’m cynical but pleasantly surprised

I have several hundred emails on carbon emissions and embodied carbon. These emails have been with UK and European government department officials and ministers, council officials and councillors, and industry experts. I have also been to many meetings and spoken with politicians and officials in the European Commission, UK government and York Council.

This has led me to be very cynical about the approach that government and commercial interested have towards climate change. There is a desire to appear to be taking climate change seriously but drag they feet when difficult choices are to be made.

Because of this experience and the cynicism I have learned, I was very surprised when I read the NPPF’s stipulation that developments must not “compromising the ability of future generations to meet their own needs”.

I ask myself “Was this a mistake – a typo writ large – or had some decent official infiltrated the system to slip in this climate-friendly condition? Perhaps they did not foresee the consequences.

Anyway, it’s now the law and the proposed York Central development may be illegal. I have written to York’s chief legal officer pointing out this worst-case scenario:

1) York Council grants planning permission.
2) The Secretary of State does not intervene.
3) Work starts on site.
4) The development is judged illegal at judicial review.
5) York Council is sued by the developers for the for costs incurred.

If there is a large interval between (3) an (4) York Council could incur enormous costs.

P.S. This month the UK High Court has taken climate change into account and has ruled that the government’s Guidance on Fracking is unlawful. This should be a warning to York Council.