The York Local Plan is ‘stealing their future’ | Brussels Blog

The York Local Plan is ‘stealing their future’ 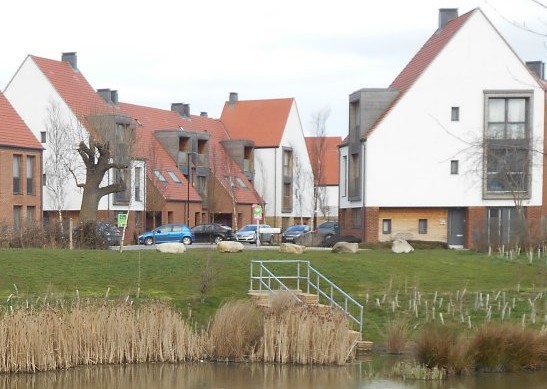 The lifestyles of motorists are not compatible with continued life on Earth.

The Joseph Rowntree Foundation got researchers at the University of York to look at the new development at Derwenthorpe, York, using their REAP Petite software. Derwenthorpe was meant to be sustainable and have a low greenhouse gas (GHG) footprint but it achieved a planet-destroying footprint of 14.52 tonnes CO2e per resident per year. This was worse than the average for York as a whole, which was still planet-destroying at 14.30 tonnes CO2e.

World average emissions of CO2e are now about 7 tonnes CO2e per person per year. This racks up a planet-threatening 100 tonnes of CO2e by 2050 – even if emissions steadily declined to zero during that time. Emissions from Derwenthorpe and the rest of York are more than twice the world average.

Although, Derwenthorpe residents have lower emissions due to the central wood chip burner that provides their heating, their carbon footprint for travel was estimated at 45% higher than York’s average. Car use is an important part of this : “Despite only one car space per household, few households had reduced their car use substantially”

There was an aim to reduce car dependency in Derwenthorpe but not to reduce the level of car ownership. The aim was to ensure that alternative transport methods were available and promoted so that residents could ‘decide for themselves to use their car less’. A car club was set up for the hire of a car but this had limited use:

To be economically sustainable, the car needs to be used on average for 70
hours a month, which Derwenthorpe had not achieved in its first two years.
However, the number of hours booked had begun to improve in autumn
2014 and early 2015.

Residents were offered free bus passes and a voucher to buy a bicycle.

Other research confirms that the type of campaign used at Derwenthorpe (information coupled with incentives to cut car use) does not work. In Using mobility management to

We do not find evidence supporting the conclusions from previous studies
that information-based mobility management programmes reduce car travel.
Neither a tailored information treatment on its own, nor in combination
with a free seven day public transit pass, lead to significant reductions in the
number of people who use their private car to get to work in our experiment.
This is true both in the short and the medium term.

The previous studies mentioned had shown minor reductions in car trips (between 5% and 15%). Even that is not enough to make car-based lifestyles live within a carbon budget that will prevent climate disaster – nowhere near enough.

The Derwenthorpe study explains that the carbon footprints of the residents are related to their incomes, which were higher than average:

[It] should be noted that, compared with the national REAP Petite sample,
Derwenthorpe REAP Petite respondents are skewed towards higher income
households with the richest 10 per cent of households nationally consuming
three times more carbon for household energy and travel than the poorest 10%.

Wealthier groups than Derwenthorpe residents will have even higher GHG emissions – and even more cars. It is implicit in the York Local Plan, that most of the planned housing will be for residents that have high GHG emissions.

We can confidently say that:

The York Local Plan is not environmentally sustainable.

3. Planning for motorists is now banned

The National Planning Policy Framework (NPPF) lays down rules for planning authorities.  The current NPPF has requirements that ban developments that create large greenhouse gas emissions. In paragraph 7 it states:

Footnote 4 refers to, Resolution 42/187 of the United Nations General Assembly, which contains

[The United Nations General Assembly] agrees further that an equitable
sharing of the environmental costs and benefits of economic development
between and within countries and between present and future generations
is a key to achieving sustainable development;

Average world GHG emissions, at 7 tonnes per person per year , violate Resolution 42/187 – and the planned developments in the York Local Plan are for lifestyles with at least twice those emissions. So …

Our biosphere is being sacrificed so that rich people in countries like mine can
live in luxury. It is the sufferings of the many which pay for the luxuries of the few.
The year 2078, I will celebrate my 75th birthday. If I have children maybe they
will spend that day with me. Maybe they will ask me about you. Maybe they will
ask why you didn’t do anything while there still was time to act. You say you
love your children above all else, and yet you are stealing their future in front
of their very eyes.

Our young should know that the York Local Plan is