“I want you to panic” | Brussels Blog

According to the report (SR15), to keep the rise in global temperature below 1.5°C, total CO2 emissions must not exceed 570 billion tonnes (570Gt). This is “the remaining carbon budget for 1.5°C”. Although the models used for the report did not include these feedbacks, it did say:

Potential additional carbon release from future permafrost thawing and methane release from wetlands would reduce budgets by up to 100 GtCO2 over the course of this century and more thereafter (medium confidence).

Depending on assumptions, the total budget could be reduced by 100 GtCO2 to as little as 470 GtCO2 (or 62 tonnes CO2 each when divided by the current world population). As SR15 says, global emissions are now 42 GtCO2, exhausting the remaining carbon budget in just under 12 years.

In April last year, The impact of Earth system feedbacks on carbon budgets and climate response by Lowe & Bernie wrote

In the case of our upper estimate of the extra Earth system forcings, this corresponds to around a 350 GtCO2 budget reduction for a 1.5°C limit and around a 500 GtCO2 reduction for 2°C. 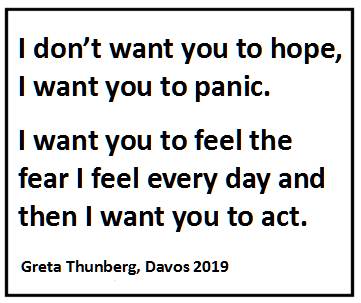 Appendix: More to do

I started this piece after Professor Richard Betts kindly responded to a question I asked on Twitter. He was supportive of the Lowe  & Bernie paper.

I had been relying on a Carbon Brief article on remaining 1.5°C carbon budgets. This says of Lowe & Bernie:

A carbon budget of below zero indicates that existing emissions already commit us to a greater than 33% chance of 1.5C warming or more by the end of the century and that more emissions would have to be removed from the atmosphere than emitted to meet the target.

I have not yet been able to match up this quote with the actual paper, The impact of Earth system feedbacks on carbon budgets and climate response. Depressing, more work to do.

At least this has made me look at the Supplementary Material to SR15 to see if anyone is testing the claim that the lifestyles of motorists are not compatible with continued life on Earth. There seem to be lots of Integrated Assessment Models to test what actions can be taken to fend off disaster. Haven’t spotted one that models going car-free soon.