This is work in progress and may change

A response to a the Call for Sites Consultation

from the City of York Council 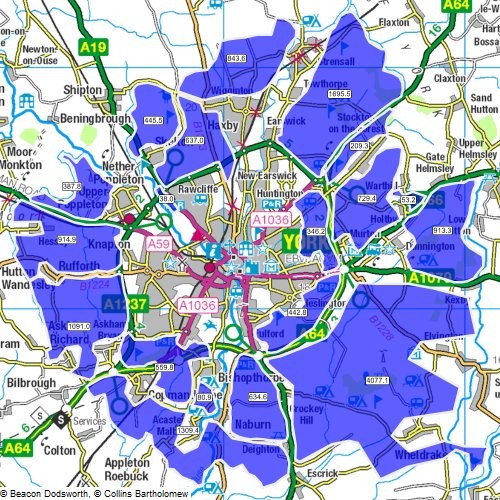 This is a submission for sites to be considered for development in York. The key issues concern

The ownership of land and options on land.

I have outlined most of the undeveloped land within the York boundary which avoids clusters of houses because their mixed ownership is likely to promote conflict. (e.g. The houses in a terrace of houses are likely to be owned by several different householders so nearby development would need their views to be taken into account.)

The area outlined in this submission is 15371.3 hectares. At ten homes to the hectare there is room for 153,713 dwellings. This is far in excess of York’s needs.

The reason for putting forward such a large area is that I have little easy access to the patterns of ownership of land (or options on land) within York’s boundary. It would be necessary to know this to make a sensible plan under the new planning rules that the government has set. The ownership of land or options is now of material importance because plans can now take into consideration the value of land. It is important that monopoly positions are avoided so that land or option owners do not extract monopoly prices.

I understand that York Council planners are expecting land ownership to be revealed when responses to this call for development sites are received. Although this call is open to responses from members of the public, lack of knowledge of ownership patterns clearly restricts their abilities to respond, in the absense of long and expensive searches using the records held by the Land Registry. This places an unreasonable barrier in the way of the involvement of members of the public.

If it is the policy of York City Council to use the responses to the call for proposals for development sites to assertain the ownership status of possible sites, they may be making a mistake. For example, this response is being put forward with little or no knowledge of land ownership or options on the land. This response will reveal nothing about ownership status.

This submission reduces danger of a monopoly prices because it creates a large area of land due to the oversupply land available for planning permission. That does not mean a complete abandonment of case by case planning decisions.

The carbon footprint of new buildings

The type of homes that should now be built are ones that are carbon negative (i.e. the fabric of the dwelling stores more carbon than is created as part of its construction). They should use substantial amounts of wood or other biomass. I reject the approach of the BSI’s PAS2050 which, in my view, underestimates the carbon footprint of materials such as cement and over estimates the carbon footprint of wood. In the case of wood, PAS2050 dismisses the value of storing carbon in wood structures and gives wood a positive rather than a negative carbon footprint. This is a complicated argument but it is my suspicion that Government Departments and others support PAS2050 because it is less critical of current practices than should be the case. It seems the widely used BREEAM methodology, which gives an environmental score for building, does not measure the carbon created or stored in building construction. If this is so, I find it strange that it is widely used.
At the cheaper end of carbon negative buildings are small dwellings which may qualify as “park homes”. Park homes are very cheap compared to conventional housing so are often attractive to older people releasing equity by downsizing to a park home from a conventional house. But for reasons I attribute mostly to prejudice planning permission to locate them is restricted and restrictive conditions is usually placed on them. Restrictions typically include a condition that the park home must be vacated for several weeks each year.

The provision of housing that is truly affordable.

The restricted supply of planning permissions puts the owners of sites are in a strong market position. There has been suggestions that some site owners abuse their position. The Park Home Owners Justice Campaign has an e-petition http://epetitions.direct.gov.uk/petitions/22757 that says:

FURTHER LEGISLATIVE PROTECTION FOR PARK HOME OWNERS FROM SEVERE HARASSMENT BY SITE OWNERS WHERE THE POLICE TOO OFTEN DO NOT TAKE AN INTEREST.

Increasing the sites available for park homes, would introduce competition in the provision of sites for park homes and result in better conditions for residents. I see no reasons for the requirement for a vacation period except the prejudice of planners.

I think park home settlements could provide one model for the “rich gene pool of settlement types” I describe in Making planning work differently.

I have pointed out elsewhere that growth is often environmentally unsustainable (e.g.  Forest fires cause growth, a car crash causes growth).  York should concentrate not on growth but on job creation in a way that encourages environmentally friendly economic activity and at the same time discourages economic activity that is environmentally polluting. The sum of green growth and polluting  growth means is what economists and politicians simply call “growth”.  This (aggregate) growth is not a useful policy target. We need green growth to be buoyant and polluting growth to be in recession.  I have pointed out elsewhere that it is possible to increase employment under these circumstances.
The most damaging aspect of polluting economic activity  is the emission of greenhouse gasses. The best method  achieving this would be a nationally imposed carbon tax to be used to subsidise jobs, particularly at the bottom of the labour market where there is most unemployment.
Although carbon taxes are coming into mainstream debate, it is unlikely that they will come in soon to limit carbon pollution enough to substantially change lifestyles. This means policy makers take less direct market options to cut carbon emissions such as public information campaigns and subsidies. Sadly  policy makers avoid telling the public unpalatable facts like the enormous carbon footprint of beef or building construction and downplay the difficulties with subsidised energy efficiency measures.
Public information campaigns and green subsidies will be helpful for the “enhanced park home” developments I envisage for York. The public do not want to ruin the world for future generations,  give them a vision of how York can invent new and truly sustainable ways of living and many will want to take up such lifestyles. I address this in Making planning work differently.
Apart from putting York at the forefront of the fight against climate change, the development strategy I propose would create many local jobs for servicing the developments and jobs in horticulture, transport, building, architecture and landscaping. The biggest boost to employment may come because lots of cheap accommodation will come available. I will address this in future posts.

Climate change is much worse than the official line.

An integrated approach to food needed.

This is really interesting, you are completely right about the environmental costs of conventional building. The need for massive changes in the planning/land use rules and the fact that not all growth is good growth.

Can your children afford to live in York? http://www.yorkmix.com/opinion/can-your-children-afford-to-live-in-york/ ……

“Their house cost them less than $20,000 to make their home and they only pay $145 rent for the lot on which their shack and workshop stands.”

That’s a home for £12,500 for a family. The response by readers of the Mail was overwhelmingly positive.

Aimed at first-time buyers, the city’s “I build affordable in Nijmegen” initiative (IbbN) has paired 20 architects with building companies to produce about 30 designs – from detached timber cabins to redbrick terraced houses – with a construction cost of as little as €115,000 (£97,400).”