The Joseph Rowntree Foundation could do better | Brussels Blog

The Joseph Rowntree Foundation could do better

The Joseph Rowntree Foundation
could do better 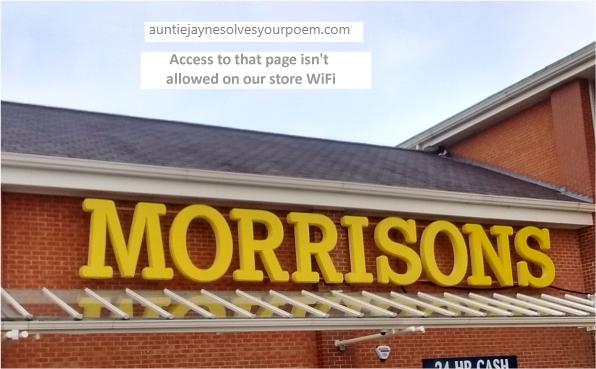 Once upon a time I was a poet. Quite a good one. You can read some of my stuff on Auntie Jayne Solves Your Poem, unless you are in Morrisons Supermarket, where it is banned. Morrisons allows the Racing Post but not Oddschecker (reason=GAMBLING ). Most of my other websites are banned too but the reason fields are blank. Pity. Morrison’s customers are a refreshing change from the pretentious middle classes who shop at Waitrose – F&H, M&J and a few others are obviously excepted from this slur. (Note for US readers: In the UK the “middle class” are considered a step up the social scale from the “working class” but it’s complicated.)

My second book, Tuesday Night Again, has one good review on Amazon. Thank you Wilson Zetland. You can buy one (Used: Very Good) for £0.59p. Earlier, I had written poems about economics because I was desperate to get important issues voiced. If I couldn’t get mainstream economists to listen, I would try the long-shot of making my poems accomplished enough to challenge them. That’s the kind of thing us Angry Amateurs get up to. Just a bit barmy.

I have just been looking for a relevant comment on the lump of labour fallacy to highlight this posting and, surprise, surprise, I found a quote from the FT’s Samuel Britain in one of my poems from 1993. Here it  is …

The most frequently recurring scare in world economic history
is sometimes dignified by the name “lump of labour fallacy”.
It is based on the idea that total output is fixed, so that if fewer
workers are needed in one line of activity they must end up on
the scrap heap.

You are a
Lump of labour
Bonehead

Everyone else
Knows
That total
Output
Isn’t fixed

In my case
It’s going
Down
And down

Not my best but I can still read it without blushing.

Inclusive growth, the “lump of labour fallacy” fallacy
and the sixth mass extinction

This poem points to a fallacy economists fall for when they silently assume there are no long-run limits to consumption and output. They assume consumption and output will continue to rise as society and technology progress. They concede “frictional adjustments”, like local and time limited pockets of unemployment, but in the long run increased consumption will generate jobs.

Scientists analysed both common and rare species and found billions of regional or local populations have been lost. They blame human overpopulation and over consumption for the crisis and warn that it threatens the survival of human civilisation, with just a short window of time in which to act.

The study, published in the peer-reviewed journal Proceedings of the National Academy of Sciences, eschews the normally sober tone of scientific papers and calls the massive loss of wildlife a “biological annihilation” that represents a “frightening assault on the foundations of human civilisation”.

The production of goods and services for consumers like us creates greenhouse gasses. In the coming decades greenhouse gas emissions from each unit of production (also called the carbon intensity of production) cannot be reduced fast enough to avoid this conclusion: Unless we reduce consumption and economic output we will exceed the remaining carbon budgets and threaten climate driven extinction events. It’s unfortunate that many economists, the foremost policy gurus of our time, don’t seem to be up-to-speed on the dangers we face. (A small plug here for my encounter with Nobel Lauriate, economist Amartya Sen, who does go for growth. P.S. After the encounter he didn’t reply as promised.)

It is disingenuous (or possibly just ignorant) to deflect concerns about jobs and inequality with the assumption that given time economic growth will cure all. A much better poet wrote

‘Had we but world enough and time …’

BUT WE HAVEN’T WORLD ENOUGH

Now, I have a few grudges against the Joseph Rowntree Foundation (JRF). A small one is because I applied to be their new (but amateur) CEO and failed. (My application is shown as an appendix.) My main grudge is that I think they are one of the few organisations, who are in a position to make a real difference to the world and they fluff it.

I believe that the JRF founder, Joseph Rowntree, and his son, Seebohm Rowntree, would be welcomed into my Club of Angry Amateurs. Their incomes were not generated by their efforts to make a better world so in a sense they were amateurs. A controlled anger shows in their writing. Joseph Rowntree’s Founder’s Memorandum sent shivers through me.

Perhaps the greatest danger of our national life arises from the power of selfish and unscrupulous wealth which influences public opinion largely through the press (e.g. the Opium and Drink traffic, and the South African War).

I have already alluded to the Land question. Such aspects of it as the nationalisation of land, or the taxation of land values, or the appropriation of the unearned increment – all needs a treatment far more thorough than they have yet received.

An article I wrote for YorkMix.com How the Joseph Rowntree Foundation could do more for the poor used a comment from a friend “[The JRF] commission academics to write reports to fill university libraries.” One of the latest library fillers is Job creation for inclusive growth in cities. The authors boast

We can solve UK poverty

Job creation for inclusive growth in cities shows how increasing demand for labour can contribute to growth that benefits everyone – a key focus of our strategy to solve UK poverty.

In choosing “inclusive growth” to “solve poverty”, the authors, in line with other JRF pronouncements, advocate banishing poverty by making the poor more productive by “supply side” measures (such as training) so they can have jobs with higher wages. The authors also advocate “demand side” measures to boost employment and consumption.

However, higher productivity with a high level of employment means  more consumption – at a time when climate disaster can only be avoided if aggregate consumption falls because the carbon intensity of production cannot fall fast enough.

It is the also the present government’s aim to have a workforce which is well paid because it is a workforce with high productivity.  This may be the justification for a higher minimum wage.  (However, it is accompanied by changes to the  benefit system.  If you can’t get one of these jobs with higher wages and higher productivity you will suffer the cruelty of the new Universal Credit system.)

The message from the authors and the Joseph Rowntree Foundation in “working with governments”  lends support to the governments stance.  What they fail to recognise (openly at least) is that the rich and affluent are the big climate problem and “solving poverty” must curb their consumption to allow the poor to have a little more.  Oxfam’s info-graphic is very instructive…

There are plenty of ways that the rich and affluent can cut their consumption. If there were to be a God, He might send these new commandments:

Kill My world as little as you can
Don’t drive your car,
Don’t fly in planes
And leave that corned beef in the can

Solving poverty has a much easier prescription than planet destroying inclusive growth: Take from the rich and give to the poor. That may not be something an organisation ‘working with government’ might avoid saying. Jonny Void puts it blunty in How The Joseph Rowntree Foundation Stopped Worrying And Learned To Love The Tory Party.

It is difficult to get a man to understand something,
when his salary depends upon his not understanding it.

P.S. The answer to poverty cannot be for the poor to output more climate destroying stuff. I hope those at the JRF and those funded by the JRF read the recent publication in the Proceedings of the National Academy of Science, Biological annihilation via the ongoing sixth mass extinction signaled by vertebrate population losses and declines.

As Pirate Jenny might have said to the whole human race ‘That’ll learn ya‘.

In Job creation for inclusive growth in cities the authors say

Without increasing the availability of more and better jobs, raising labour skills and qualifications can mean people are over-qualified for the available jobs (Schmuecker, 2014). To deliver inclusive growth, the close relationship between demand and supply means complementary , sequenced and supportive policy intervention is needed on the demand and supply sides, for example by generating increased local demand for more skilled labour by employers as well as and at the same time as supporting local labour skill upgrading.

Memo to the National Council for Vocational Qualifications

My hair
My taps
My garden wall

Must I have my hair cut three times more
Have leaky pipes that didn’t leak before
Have an extension put on my house
And have more kids to fill it.

But I’m not spending my money at all.
I’m saving it all to spend on my soul.
So what will we do with bricklayers and plumbers
That we have trained in enormous numbers

Whoever it is at the top of the tree
They must be clever, as clever me.
For they’ll certainly see that in fifty years time
We’ll need lots of rhymers to make our rhymes rhyme.

So now we know, we’ve just the time

But like the old lady
That swallowed the horse
I’ll be dead of course.

Sometime in the early 1990s, I did meet Sir Brian Nicholson, head of the NCVQ, who was kind enough to let me visit him in his office in Sheffield Hallam University.  As is often the case, I remember coming away rather dissatisfied.

Appendix 2. Application to be CEO at the Joseph Rowntree Foundation

Context of this CV:

The most important role of chief executive one of setting a new policy direction. My first action will be to advertise for a deputy who can effectively manage these organisations.

The JRF and the JRHT have become distanced from the ethos of the most prominent Rowntrees. Joseph and Seebohm had a mission to alleviate poverty. This was separate from their own monetary rewards. As chief executive I will accept no salary – just reasonable expenses.

Failure of the JRF/JRHT is evident in the Derwenthorpe housing development. This “was envisaged to be one of the first large-scale low carbon communities” – with provision for affordable housing. Derwenthorpe can be more aptly described as expensive unsustainable housing. See Three failed eco-towns.

I have some sympathy with what Jonny Void said on his website (but I wouldn’t express as crudely) in How The Joseph Rowntree Foundation Stopped Worrying And Learned To Love The Tory Party.

Some of my publications

Articles can on the economics, inequality, housing and climate change can be found on BrusselsBlog.co.uk.

How the Joseph Rowntree Foundation could do more for the poor. Note the comments in this article:

‘JRF are in an ivory tower’
‘They commission academics to write reports to fill university libraries.’

This article outlines a policy of very large scale labour subsidies which presents the possibility of creating full employment – reducing unemployment to the level of ‘frictional’ unemployment only.

The employment effect of subsidies – a report for the European Commission.

A report together with Professor Kim Swales of Strathclyde University with funding arranged through DG5.

This proposal was written for a friend interested in contributing to the development of Derwenthorpe.
I would be pleased to answer any questions.