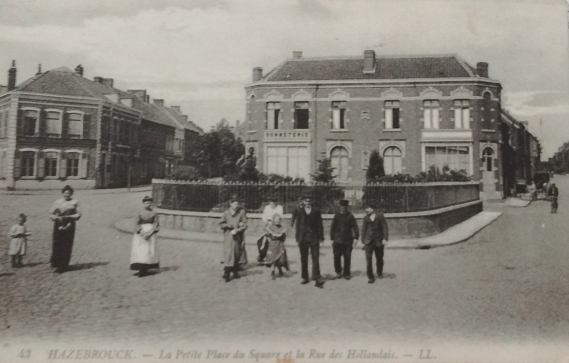 Hazebrouck before the car

In 1976, I wrote a note, “RSPCA News”, about developments for non-motorists, where they are separated from motorists. This outlined financial and legal mechanisms that could make non-motorist developments work.

For decades I have been using ‘Pedestrian Apartheid’ in conversation to describe this form of separate development but I never had the bottle to write it because the A-word challenged the dominant “mixed communities” paradigm for housing. That policy aimed to mix the better off, likely to be motorists, with the less well off, more likely to be non-motorists.

Fortunately, the “mixed communities” policy is falling out of fashion. The next post will go into more detail  but for now here is a  note I wrote in 1976 (headings added):

NEWSLETTER OF THE RENTS, SERVICE PAYMENTS AND COVENANTS ASSOCIATION.

Motor vehicles require large amounts of space for storage and movement. Because of their impact on the surrounding environment , this space must be carefully planned. This planning becomes rapidly more difficult as the number of vehicles increases.

Many neighbourhoods still exist which were designed for a low level of vehicle use. Typically they consist of streets of two or three storey terraced housing often found in the inner areas of towns. Good examples provide excellent housing with many more local services and better public transport than more modern neighbourhoods planned for higher vehicle use. In stress areas they cope with vandalism and other social problems far better than their modern counterparts designed for higher vehicle use, possibly because of their simpler layout. These neighbourhoods are particularly valuable for people without the use of a car.

When vehicle use increases in such neighbourhoods they deteriorate :

Due to the pressure of traffic the social and recreational use of the street disappear;

These neighbourhoods also often suffer badly from through traffic because they are between suburban areas of high vehicle use and the facilities of the town centre.

In neighbourhoods with a high level of vehicle use there is usually only a limited provision of public transport services and other local facilities. For those with access to a car, with their increased mobility, this provides little problem, but non-motorists in such neighbourhoods can suffer considerable hardship.

A poor choice for non motorists.

Non-motorists are then left with a poor choice: either a modern neighbourhood unsuited to their needs or an older one in decline. The question now is: What can be done to halt the decline of existing low vehicle use neighbourhoods or to see that at least some new ones are built to meet the needs of the non-motorist?

People who do not own a motor car have a greater need for local facilities. Possibly an important one of these is a good car-hire service for those occasions on which they really need the use of a car.

Other facilities would be – pubs, shops, delivery services, doctors, bus services, taxis, launderettes and schools. Being more compact and having a greater proportion of people using such facilities, a fuller service can be given and probably at lower cost.

The simplest solution is to have neighbourhoods in which residents are bound by covenants to prevent them owning cars. Although this may be appropriate in exceptional cases, such as the centres of historic towns. it has the drawback that it cannot easily allow for exceptional need, such as a resident who can only obtain employment if he has the use of a car. Besides, even a scheme designed for non-motorists would have the capacity for absorbing a small amount of traffic. And, if the capacity is there, why not use it?

A more flexible mechanism for ensuring that low vehicle use neighbourhoods have some stability is the Environmental Capacity Rent. (ECR). It may be explained as follows :

The possible methods of implementing Environmental Capacity Rents would partly depend on who was operating the mechanisms: local authority, neighbourhood council or co-operative.

There are several possibilities that can be considered:parking charges, supplementary licences or road tolls.

An example might be a neighbourhood in which the environmental capacity rent is set at 30 cars to 100 households.

Then whenever vehicle use exceeds this capacity for a significant length of time the charges on vehicle use can be increased. This process continuing until the desired effect is produced. 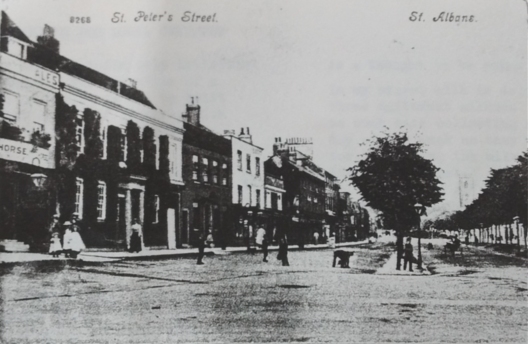 St Albans before the car

With new neighbourhoods, the application of such mechanisms is relatively simple because residents would not come to the neighbourhood if the new mechanism was offensive to them. There is more difficulty with existing ones, however, such as the Colonies in Edinburgh or the Bishophill area within the city walls of York.

One way of overcoming possible local opposition from existing car users might be to introduce a high charge with a reduced rate for residents. This could be followed by offering to buy covenants from householders which would remove the right to a reduced rate. This would, in the long run, remove the resident’s right to reduced parking charges and discourage people that required a high use of vehicles from settling in the area.

The precarious state of world resources

The main reason for the lack or attention to the problems of non-motorists has been the assumption that in a few decades nearly everyone will have a car. The recent realisation of the precarious state of world resources brings this assumption into question. Therefore, the low vehicle use neighbourhood has a positive role to play.

It promotes a smaller use of energy in transportation, partly by encouraging the use of public transport and cycling and partly by encouraging local services. This latter could be enhanced if those employed in the services were encouraged to be resident in the neighbourhood by, say, a local employment premium. In this greater provision of local services there is more scope for energy saving by, say, employing heat exchangers in a local launderette – something which is more difficult for a domestic washing machine. Also because of its more compact form, a low vehicle use neighbourhood can be less wasteful in energy and materials to build, heat and maintain.

A well-planned low vehicle use area could in all probability use resources more economically than some of the proposals for autonomous living in which people live in small villages and use windmills with an output of one megajoule per hour and then use one hundred megajoules a day driving to work and back in their car. That is not to say, of course, that such innovations as solar heating should not be used in low vehicle use neighbourhoods.

Energy and resource questions aside (let us imagine the improbability that the Zeta pinch fusion process is made to work in the next few decades), low vehicle use neighbourhoods can provide a different type of environment which many people would choose despite restrictions on their possible vehicle use. The main problem with low vehicle use neighbourhoods has not been that they are not wanted but that they are unstable with respect to the pressure of traffic. It is hoped that some of the mechanisms mentioned here may be developed to give them their needed stability.

Local services are not infinitely divisible! They come in lumps. The operation of a milk round, for example, cannot be split into two so that each half operates with half the costs and half the turnover.

Local services are desired by residents to different degrees. Some residents will value a service greatly and would be willing to pay more to see it preserved. Others would stop using the service if asked to pay more.

Local services have indirect benefits and disadvantages. Thus a launderette might be a useful social meeting place while a fish-and-chip shop cause considerable annoyance to neighbouring residents.

It is for reasons such as these that ordinary market forces by themselves cannot provide the optimum level of local services.

In the planning of neighbourhoods, it is possible to invent mechanisms to supplement or replace market forces so that a wider range and better level of service are provided.

These mechanisms, however, need to be carefully thought out in order to provide the desired result. If, for example, local shops are to be encouraged on social grounds what is the most
appropriate mechanism?

Some local authorities, when faced with this problem have built shops and let them at subsidised rents. But a shopkeeper will run a shop to maximise gross profit independently of fixed overheads. Thus, a rent subsidy will not alter the operation of the shop, and will not give the shopkeeper any incentive to expand the service.

In this case, a more appropriate mechanism would be a. higher rent and a subsidy on the shop’s turnover, thus providing the necessary incentive.

Before economic mechanisms can have a wider use in planning for a neighbourhood, much more detailed information about the costs involved in the local services is required. We hope that this may be built up in future issues.

As a thought to be going on with:

In my street milk is delivered by three different milkmen. They take as much time collecting money on one day of the week as they take in total for delivering the milk on the other days of the week. What can be done to improve the efficiency of this operation so that the residents of
the neighbourhood may benefit.

AIMS OF THE ASSOCIATION

In the next issue:-