This post was the contents of NoHighBuildings.org.uk (now retired)

The quantity of greenhouse gasses released as a result of building construction – the embodied carbon in buildings — is usually ignored. But, to their credit, it was calculated for BedZED by one of the project initiators, Bioregional. They say:

This means a 100m2 flat in BedZED has embodied carbon of 67.5 tonnes CO2. Compare this to carbon rations suggested in the GreenRationBook :

This argument gives a ration for building of 500kg CO2e per person per year. For two people living in an average-sized 3-bedroomed flat, the 67.5 tonnes CO2e is 67.5 years of their building ration. That’s before the flat is heated, the fridge switched on and the impact of all the other necessary buildings (shops, offices schools etc) are considered.

Given the location of proposed ecotowns, the suspicion must be that the new residents will come from demographic groups that naturally have high footprints. The P2 People and Places demographic system identifies that the ecotowns on the shortlist (but not including Rossington) as typical places for demographic groups B4 (Rural Comfort) and C3 (Thriving Families). These groups are more likely to be frequent fliers and heavy users of transport fuel.

And a message from the government’s eco-town team:

Standard ET9 of the eco-towns Planning Policy Statement (PPS) concerns the zero-carbon standard in eco-towns, the standard includes all buildings within the town, both residential and commercial, but does not include embodied carbon or carbon emissions related to transport.

Then why call them eco-towns? 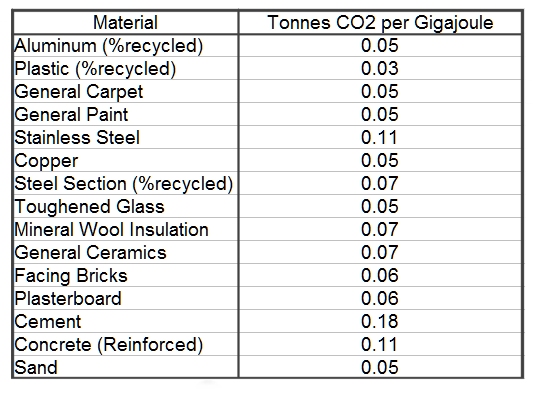 The materials that make up the bulk of tall buildings are steel and concrete. The average factor  is 0.09 (for tonnes of CO2 vs. gigajoules of embodied energy).  Using this factor and the graph from the Council on Tall Buildings gives this table for the embodied CO2 per square metre for ‘average’ tall buildings:

The building of a 100 sq metre flat in a 20 storey building will have causes about 100 tonnes of CO2 to have been emitted. This is all of the personal remaining carbon budget for a 2°C rise in global temperature above pre-industrial temperature – often quoted as the threshold of dangerous climate change.

P.S.  It’s rather worse than that.

Low building sit on a heat store – the ground. High buildings are heavy with concrete, which can store heat. Both can smoothe out the heat flows and cut energy consumption – and CO2 emissions.

But the weight of concrete at the top of a tall building is small compared with the ground underneath a low building.

By comparison, the ground is a large heat store and the concrete-in-the-sky a tiny one.

The ICE approach to recycled materials.

Professor Geoff Hammond and Craig Jones of Bath University produce the Inventory of Carbon & Energy (ICE), an inventory of building materials giving their embodied energy and carbon dioxide. It is a very useful resource. But NoHighBuildings takes issue with the methodology they choose for assessing recycled materials. It is the recycled content approach. They say

This approach is particularly relevant to metals. This approach may be compared with their treatment of the carbon footprint of timber. They do not count the carbon held in timber for it’s lifetime. They quote a paper by A. Amato “A comparative environmental appraisal of alternative framing systems for offices”. This paper says

In measuring embodied CO2, what is being sought is the CO2 burden to society which consequent upon society’s use of a particular material. The deduction of a CO2 value sequestered by the material during its manufacture from the total embodied CO2 burden is not appropriate just because a material is deemed renewable and is surely only appropriate when a world wide steady state has been achieved between consumption and production.

This alludes to the fact that if a new building uses timber from renewable sources, it diminishes the stock of renewable timber so that other buildings will need to use timber from non-renewable sources. But precisely this argument can be used for recycled steel or aluminium. Until all consumption is sourced from recycled metal, any extra that is used causes the production of virgin metal somewhere in the world.

On this score the footprint of BedZED  will be even greater than 675 Kg CO2e per square metre of floor space (see above in topic “Embodied carbon ignored”).

A German firm Baufritz is now building homes in Britain. They are mostly wooden for which they claim

The carbon balance in an average Baufritz house is approximately 50 tonnes positive. This means that if the house is run efficiently using, for example, a combination of gas and solar power, the house will take around 78 years to reach the carbon neutral stage.

But how does a Baufritz carbon positive house compare to a net zero carbon house as set out by the new Code for Sustainable Homes? The definition of net zero carbon in this instance focuses largely on the running costs of the house once built and places minimal emphasis on the amount of embodied energy already in the building which has the most significant impact on the environment. At Baufritz our carbon positive homes take into account the additional carbon emissions generated during its manufacture, construction and transport – a more realistic and holistic view.

As noted in the previous post, the compilers of the ICE database discount the carbon stored in wood because with wood the time has not yet come when “a world wide steady state has been achieved between consumption and production”. But if climate change is taken seriously, this time will come.

In this case the ICE argument might be: Baufritz plant trees within their own forests to build their homes. However, what they should do is plant plant trees to replace wood from unsustainable logging and not build at all. Really?

NoHighBuildings believes we must find ways to keep people warm in cooler homes. A person occupies a few cubic metres. Their homes occupy a few hundred of cubic metres. The warmth should be directed to people not bricks and mortar. Christine Tacon has kindly recounted these examples.

I visited Japan in 1985 and went to a coffee house in the evening where you could sit in private rooms for a chat with friends. Their houses are rarely used for entertaining so people go out. The place was unheated but you sat on the floor at a table which had a sunken base, and a large tablecloth so you could cover your legs. There was heater under the table which warmed the area only but was insufficient to heat the room, so you focused on keeping the cloth well ticked in around you!

I also stayed at an old farmhouse in the early 80s with only log fires to heat the place in Barcelona. The log fires were in the main living rooms downstairs. There were vents in the ceiling and when we went to bed the vents were slid open so the heat went up to the upstairs floor, where there was no heating at all. It wasn’t brilliant but it was better than nothing!!