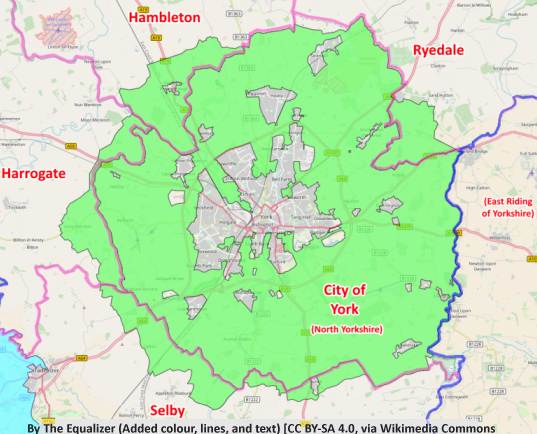 The City of York Greenbelt as shown in Wikipedia.

The proposed green belt in The York Local Plan creates a lock on large scale housing development, making changes difficult for the next twenty years or more. It has the effect of preserving the planning gain captured by land owners and rewarding home owners by increasing the value of their property.

In Why people need the Green Belt, Crispin Truman, Chief Executive of the Campaign for Rural England (CPRE) says:

The Green Belt is the ‘countryside next door’ for 30 million people – more than half of England’s population. It’s where those of us stuck in cities go to get away from the stresses and strains of urban life. Its fresh air and open spaces make it fundamental to our physical health and mental well-being.

In 2015 the Stroud News and Journal reported a survey that the CPRE funded:

The poll on the 60th anniversary of the policy to protect land and countryside around towns and cities from development found that 64% believed existing green belt land in England should be retained and not built on while just 17% disagreed.

In 2006 the Barker Review of Land Use Planning commissioned an Ipsos MORI poll. It asked ‘What types of land is it most important to protect from development?’. It allowed respondents three choices from six possibilities:

Greenbelt is ‘Land on the edge of towns and cities’. It comes bottom of this list and gets less than a third of the votes given to ‘urban parks and playing fields’. The survey method – three votes for each respondent – blunts the message: City parks are very much more valued than green belt land.

Corollary: Brownfield sites should become nature reserves and urban parks as has
happened with St Nicholas Fields, York or The Brickfields in Lower Halstow, Kent.

3. The difference between the CPRE and the Barker review

The difference between the results in CPRE surveys and those in the Barker Report requires explanation. The words in the questionnaires have different impacts. ‘Land on the edge of cities’ conjures up an image of a few fields next to urban sprawl but ‘Shall we preserve the green belt?’ evokes different images. To many the  ‘protection from urban sprawl’ of  greenbelt policy protects:

Scenic beauty: With many greenbelts it is hard to find places that scenic beauty can be easily viewed and many or even most of our scenic views are outside greenbelts. For example, the inspiring view from Burham Downs in Kent towards Maidstone is not greenbelt. The other side of the River Medway inside the London Greenbelt, the narrow tree lined roads around Luddlesdown give little chance of scenic views.

In York, it is hard to find a vantage point to capture any large scale views scenic beauty of land designated in the Local Plan’s proposed greenbelt. The vast majority of this land is not visible to York citizens or visitors, except possibly for motorists driving down Garrowby Hill coming back from Bridlington. 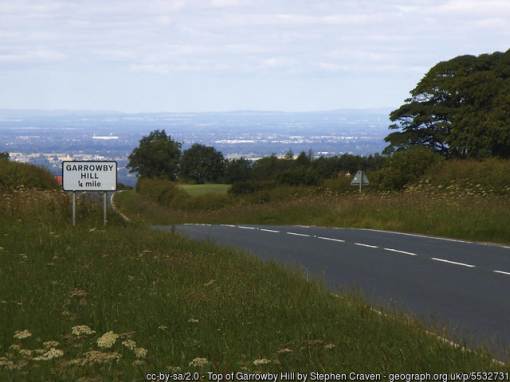 Can you spot York in the distance?

Fresh air and open spaces: York has many sites providing fresh air and open spaces. The Strays of York are over 320 hectares of open land, protected by ancient laws. There are also riverside expanses of grassland, such as Clifton Ings, that are protected for development by regular flooding. There is also the rewilded St Nicholas Fields – previously the brownfield site, The Tang Hall Rubbish Tip.

There are many footpaths and cycle ways through these green spaces (on land already protected from development) as well as on disused railway lines or through York University or York Racecourse. These do not need the protection of a green belt – they are already protected. An example: My friend Sue walks ten miles a day to and from York, mostly along the footpath following the river. She says:

It’s obviously better to walk through greenery than housing but it’s not so good if it’s just fields. Walking through trees and woods is joyful and peaceful especially if there is the extra interest of rivers, streams, brooks and wildlife.

Rivers, streams, brooks and wildlife is not delivered by the ‘just fields’ of modern farming.

The natural environment: In his criticism of greenbelt policy in The Green Noose, Tom Papworth of the Adam Smith Institute says:

An alternative to abolishing Green Belts as a category would be to remove all intensive agricultural land from the existing Green Belts.

… over a third of the Green Belt is devoted to intensive agriculture. Though in close proximity to existing urban centres, this land is of very low environmental and amenity value; intensive agricultural land has very low levels of biodiversity and is not generally accessible to the public. 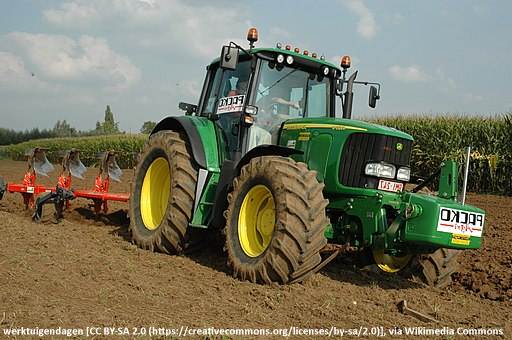 In Pollution in the countryside I argued that the modern farming (of the type practiced in the proposed York Greenbelt) is destroying soil fertility, decimating wildlife – especially insects – and causing a dangerous level of nitrate pollution due to modern fertiliser use. Michael Gove agrees:

“We have encouraged a type of farming which has damaged the Earth. Countries can withstand coups d’état, wars and conflict, even leaving the EU, but no country can withstand the loss of its soil and fertility.

If you have heavy machines churning the soil and impacting it, if you drench it in chemicals that improve yields but in the long term undercut the future fertility of that soil, you can increase yields year on year but ultimately you really are cutting the ground away from beneath your own feet. Farmers know that.”

We need to produce food in a less damaging way.   We should be producing much more food for local consumption integrated with new housing development, giving local employment, reducing local and global pollution and producing healthier food.

Fields for damaging farming methods should
not have the protection of green belt policy.

Whether intentional or not, the proposed greenbelt is a lock around the developments granted in the Local Plan. By reducing competition, it preserves the value of the allocated planning gain. This planning gain is to the benefit of a few owners of rural land and is in excess of £1 billion.

£1 billion is enough to pay for

This planning gain occurs because the supply of housing in York is far less than the demand. This causes house prices to be much greater than the cost of construction. The restricted supply benefits house owners by increasing the value of their assets. Over the past few decades it has transferred enormous wealth to house owners and has pushed  up housing costs for those who rent.

Appendix: Green belts for the wealthy

According to Zoopla, the houses inside the Luddlesdown area of green belt are three times as expensive as ones over the river, outside the greenbelt. Did this premium on house prices in greenbelt areas originate because wealthier people moved in to this green belt area or did the wealthy (and powerful) ensure that their area was designated as greenbelt?

Paul Cheshire, Professor Emeritus of economic geography at LSE commented on the effects of the wealthy on the housing market in the Guardian:

Green belts are a handsome subsidy to ‘horseyculture’ and golf. Since our planning system prevents housing competing, land for golf courses stays very cheap. More of Surrey is now under golf courses – about 2.65% – than has houses on it.

Here are some (shortened) points made in The Green Noose (2015), by Tom Papworth from the Adam Smith Institute:

– Green Belts are not the bucolic idylls some imagine them to be; indeed, more than a third of protected Green Belt land is devoted to intensive farming, which generates net environmental costs.

– The avenue of reform we favour is the complete abolition of the Green Belt, a step which could solve the housing crisis without the loss of any amenity or historical value.

– Failing this, we conclude that removing Green Belt designation from intensive agricultural land.

– In the short term, simply removing restrictions on land 10 minutes’ walk of a railway station would allow the development of 1 million more homes within the Green Belt surrounding London alone.

Read the Green Noose full report, An analysis of Green Belts and proposals for reform.

In 2003 I wrote Greening the greenbelt. This made similar points to the Green Noose paper. Here is an extract:

Green belts are mechanisms for restricting the supply of planning permission. Green belt policy is usually regarded as the one strong weapon planners have against developers who would destroy our environment; our environment which is free for us all, rich and poor, to enjoy. But, in reality, it

Open up the greenbelt to settlements that will

The Local Plan should not create a green belt around York.