Lord Deben was one of the headliners at the 2013 annual meeting of the Parliamentary Renewable and Sustainable Energy Group. Lord Deben (“the best Environment Secretary we’ve ever had”) is now Chair of the Committee on Climate Change. He spoke about progress towards the UK’s targets on carbon emissions. In the Q&A, Mayer Hillman of the Policy Studies Institute, suggested that, despite reducing carbon emissions, climate change required very much more.

Lord Deben said there was only so much that was politically possible. As I was waiting in the lobby to buttonhole him, I heard him say something more explicit: Meyer was not being realistic – there were political limits to what could be achieved.

Mayer’s point was that the laws of physics are greater than the laws of politics so we had to do much more to avert climate disaster. The Zero Carbon Britain report has called this the Physics-Politics-Gap. 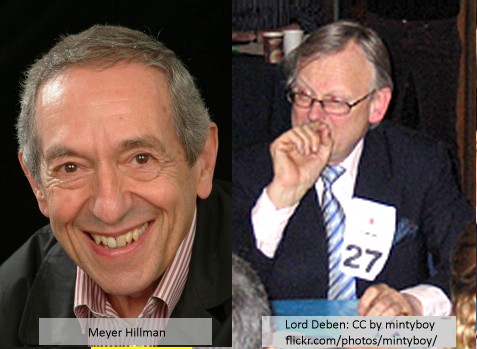 Lord Deben may be right that there are political limits to action on climate and Mayer may also be right saying that won’t be enough. This would mean that the Physics-Politics-Gap cannot be closed. The end-of-nearly-all-life-on-Earth scenario presented by LastHours.Org is actually looking plausible.

Greenwash at the CCC?

The tension between the physics and the politics of climate change generates lots of greenwash. (OED. Greenwash: Disinformation disseminated by an organization so as to present an environmentally responsible public image.)

I believe some of the important output of the Committee on Climate Change can be classed as greenwash because a reluctance to acknowledge the full extent of climate change due to the political limit on their activities. I sensed this reluctance in exchanges I had with them in 2008.

Much to Lord Deben’s credit, it is since he became chairman, that the CCC has actually published a report showing the UK’s carbon footprint has been rising not falling since 1990 as the Department of Energy and Climate Change claims – except for two years after the Lehman Brothers crash. (See Figure 1.8: Greenhouse gas emissions associated with UK consumption – imported and domestic emissions, 1993-2010 in Reducing the UK’s carbon footprint.)

In December 2012 Professor Sir Bob Watson also spoke on the UK’s rising carbon footprint  at the 2012 fall meeting of the AGU. At that time he was Chief Scientific Adviser to Defra. 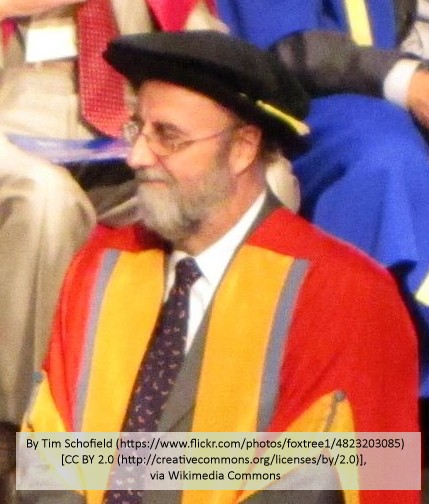 Sir Bob Watson, Chief Scientific Advisor to the UK Department of Food, Environment and Rural Affairs, spoke of the UK’s rising carbon footprint when it was measured properly (i.e. on a consumption basis).

The Global Commission on the Economy and Climate

A report from The Global Commission on the Economy and Climate was published last week. It was chaired by Felipe Calderón, Former President of Mexico and co-chaired by Nicholas Stern, the author of the influential Stern Review on the Economics of Climate Change, published by the UK Government in 2006. The press release of th Global Commission says:

The New Climate Economy report refutes the idea that we must choose between fighting climate change or growing the world’s economy. That is a false dilemma,” said former President of Mexico Felipe Calderón, Chair of the Global Commission on the Economy and Climate. “Today’s report details compelling evidence on how technological change is driving new opportunities to improve growth, create jobs, boost company profits and spur economic development. The report sends a clear message to government and private sector leaders: we can improve the economy and tackle climate change at the same time.” 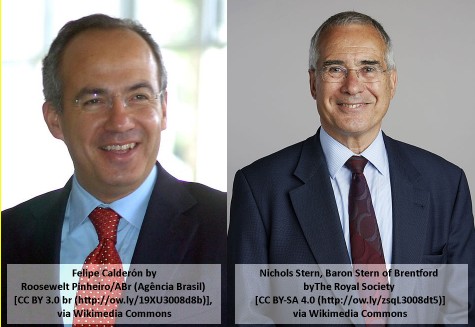 Felipe Calderon and Nicholas Stern:
We can improve the economy and tackle climate change at the same time

Is it possible to “fight climate change” and “grow the world’s economy” ?

The world’s economy, measured in GDPs, is made up of different economic activities. It may be possible to remove highly polluting activities and replace it with less polluting activities but that will be very much harder than the report suggests. How big a hole in world GDP would be caused by cutting most gas heating, coal powered electricity, air travel, driving cars and the consumption of hot-house tomatoes, beef and lamb? Could this consumption-gap be filled by renewable power, public transport, locally grown seasonable vegetables and fish?

If this hole can’t be filled should we worry?

Jobs are part of the fabric of our societies. The findings of the DWP’s report Is work good for your health and well-being? include

— Work meets important psychosocial needs in societies where employment is the norm;
— Work is central to individual identity, social roles and social status;
— Employment and socio-economic status are the main drivers of social gradients in physical and mental health and mortality;

Jobs are important but it is a fallacy that jobs cannot be created without economic growth. Jobs can be created provided some form of redistribution is accepted. One example is described in The Employment Effect of Subsidies (1997), a report to the European Commission by J K Swales, D R Holden, G Beacon. 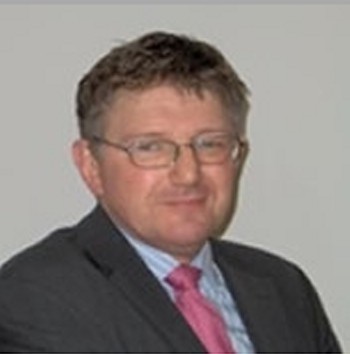 Kim Swales
The introduction of [this] new tax scheme would simultaneously increase employment and reduce taxation.

If jobs are not the problem, what is?

The expansion and profitability of businesses

Should the expansion and profitability of businesses be a policy objective? Free market theory does not seem to support this. I’m surprised that a commission with so many economists should embrace it. Wikipedia says

The purpose of the market is to efficiently allocate resources and to maximize the welfare of consumers and producers alike. The market therefore regards excess profits, or economic rents, as a signal of inefficiency, that is of market failure.

This leaves the aim to “improve living standards” but if this is measured by GDP per capita then in rich developed countries this has little or no effect on well being. Richard Wilkinson’s Ted Talk shows the average well-being in these countries is not dependent any longer on national income and economic growth but that societies that are more equal are healthier, and happier ones. 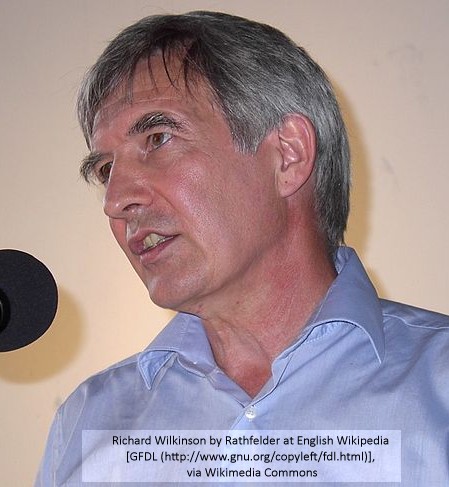 Richard Wilkinson.
Well-being not dependent on income and economic growth.

The Commission may be correct in saying government and businesses want economic growth, which means more consumption but do we? A read of the recent report from PwC will show how difficult it will be to do save the climate on prijected levels of economic activity. The report, Two degrees of separation: ambition and reality, Low Carbon Economy Index 2014, reports on trends and projections of carbon Intensity. (Carbon Intensity is the amount of carbon dioxide emitted per dollar of GDP.) The report says:

The 2014 Low Carbon Economy Index (LCEI) shows an unmistakeable trend. For the sixth year running, the global economy has missed the decarbonisation target needed to limit global warming to 2˚C. Confronted with the challenge in 2013 of decarbonising at 6% a year, we managed only 1.2%

To avoid two degrees of warming, the global economy now needs to decarbonise at 6.2% a year, more than five times faster than the current rate, every year from now till 2100. On our current burn rate we blow our carbon budget by 2034, sixty six years ahead of schedule. This trajectory, based on IPCC data, takes us to four degrees of warming by the end of the century.

Is climate change even worse?

The situation may well be even worse. The PwC report, excellent though it is, only discusses CO2 from energy generation. Emission of methane (e.g. from the agricultural sector) are omitted. Some have claimed emissions from agriculture are about half of annual worldwide GHG emission (See How long is livestock’s shadow?)

Another worry is that the recent IPPC reports have been based on underpowered climate models (the CMIP5 models). The note from the Parliamentary Office of Science and Technology, Risks from Climate Feedbacks (POST-PN-454,January 2014) says

Compared to existing model estimates, it is likely that climate feedbacks will result in additional carbon in the atmosphere and additional warming. This is because the majority of poorly represented climate feedbacks are likely to be amplifying feedbacks. This additional atmospheric carbon from climate feedbacks could make it more difficult to avoid a greater than 2˚C rise in global temperatures without additional reductions in greenhouse gas emissions. The strength of many amplifying feedbacks is likely to increase with warming, which could increase the risk of the climate changing state (Box 3). Some commentators suggest the uncertainties in our knowledge of carbon cycle and physical feedbacks may mean the Earth will warm faster than models currently estimate.

Is this new report from Lord Stern greenwash?

I think so – and its caused by the Physics-Politics Gap

Image by permission of the Centre for Alternative Technology http://www.cat.org.uk