Had we but world enough and time. | Brussels Blog

Had we but world enough and time.

Had we but world enough and time 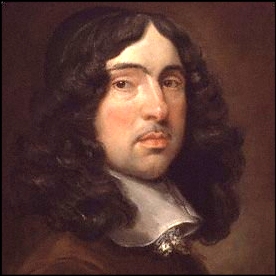 Andrew Marvell was a much better poet than I ever was. His most famous poem is To His Coy Mistress. I encourage readers to go to the Poetry Foundation website and read the whole poem and also forgive me for chopping bits out with my own headings

The world is limited and time is short

Had we but world enough and time,
This coyness, lady, were no crime.
We would sit down, and think which way
To walk, and pass our long love’s day.

But at my back I always hear
Time’s wingèd chariot hurrying near;
And yonder all before us lie
Deserts of vast eternity.
Thy beauty shall no more be found;
Nor, in thy marble vault, shall sound
My echoing song; then worms shall try
That long-preserved virginity

Let us roll all our strength and all
Our sweetness up into one ball,
And tear our pleasures with rough strife
Through the iron gates of life:
Thus, though we cannot make our sun
Stand still, yet we will make him run.

Hands up those readers that know about Guy McPherson’s Nature Bats Last.  He predicts that the climate change that us humans have started will cause a sixth extinction event: Most species disappear, including humans. There have been five previous mass extinctions in Earth’s history and McPherson says it’s too late do to stop this one. In a presentation he gave in York he said he wanted us to leave the Earth as gracefully as possible. In the video of the event, the first question and response condenses his argument:

My rough and ready transcription of his words:

I’m  looking forward to the 10 million years [after the sixth mass extinction] and hoping we can save as many seeds as possible to re-populate – to give us a vibrant thriving planet again. It won’t have humans on it but love each other and love the living planet while we have a chance.

Notice that both Marvell  and McPherson say: “We are going to die so let’s enjoy what life we have”. The difference is that McPherson says the human race will disappear in the coming decades – not just individual humans, with most other species we will be extinct. Humans will be no more.

Had we but world enough and time

I didn’t mean to get into this Marvell/McPherson stuff, trying to keep what I write as close to mainstream as possible – in the vain hope of having a little credibility – but having remembered the world enough and time quote, I got a bit carried away. But did I? Do many of us care much about the future of the human race and the rest of the species on Earth? Loudly we proclaim “Yes” but our actions say “No”.

I’m waiting for a response from my favourite climate expert to Daniel Rothman’s Thresholds of catastrophe in the Earth system. This scientific paper indicates we are on course for a sixth extinction. He concludes this from an analysis of the deep-sea sedimentary carbonate deposits made from the skeletons of long-gone tiny sea creatures.   I have asked a few times got but the only response to a question about Rothman’s paper was in Neven’s excellent Arctic Forum. The response was from someone with the handle “Avalonium”, who clearly has some sort of expert knowledge:

… I’m not entirely sure that this is telling us much that is new, though, beyond the details. We know that there are points beyond which acidification and temperature rise are very bad news, and 2100 is a time by which pigeons will be well and truly home to roost…

Genuine thanks to Avalonium but “the pigeons come home to roost” is a limp expression for the sixth mass-extinction; an extinction that includes the human race.   However, if you ask  enough ordinary people you will find many people that believe the human race is doomed (as is deserved) and will dragging many other species with it.  “Ordinary” in this context means those without credentials, those with out a professional interest, those who don’t have a reputation to loose. Perhaps a touch of Upton Sinclair will illuminate:

“It is difficult to get a man to understand something, when his salary depends on his not understanding it.”

OK, that was patronising – you knew that already. Wouldn’t it be nice if the Main Stream Media acknowledged it.

The Global Carbon Project says that, in order to have a good chance of keeping below 2°C, the emissions of CO2 from 2017 onwards must be below the CO2 quota of 816 tonnes, often called the remaining CO2 budget. 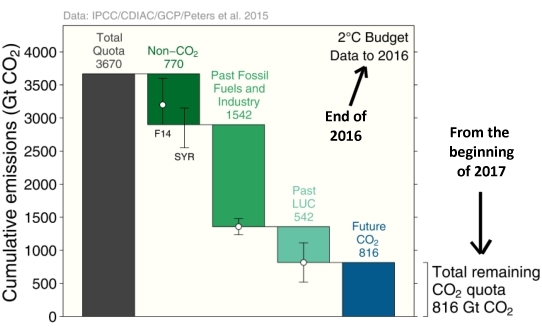 According to the Carbon Budget 2016, total global emissions of CO2 in 2015 were 41.9 GtCO2 – it won’t be much different in 2017. The graph below shows two reductions scenarios. The first is a yearly reduction of 1.0 Gt CO2, this is a rate that, on average, just exceeds the most optimistic of the IPCC’s scenarios for CO2 emissions. (That’s called RCP2.6). The second describes CO2 emissions falling by half that rate, i.e.  0.5 Gt CO2/year. 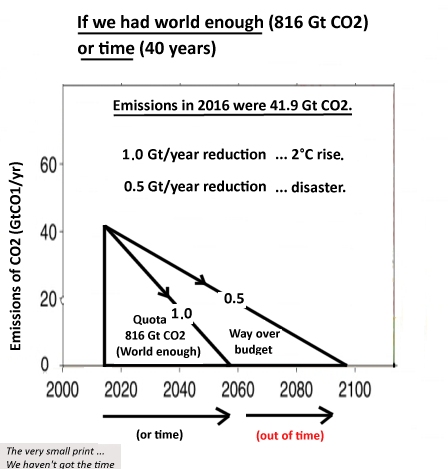 The quota of 816 Gt is for CO2 only. Other climate pollutants are considered separately.

The despair of democratic ignorance

I  despair for democracy when ignorant people say the climate will be OK when we have:

All these could cut our greenhouse emissions.   The catch: They can’t be done fast enough, not even fast  enough to achieve the climate busting reduction of 0.5 Gt CO2/year. Saving the climate is not just becoming zero carbon but doing it fast enough (without creating large emissions making  new cars and building new buildings). That means reducing our consumption and accepting degrowth and creating different and simpler lifestyles.

We need to change our lifestyles. Perhaps we should ask God for some enhanced commandments. His new commandments might start like this:

Kill My world as little as you can
Don’t drive a car,
Don’t fly in planes
And leave that corned beef in the can

“However much people profess to care about climate change, they do not seem willing to vote for this – nor do politicians seem willing to really try and persuade them,” he said. “All the evidence from the past 15 years leads me to conclude that actually delivering 1.5C is simply incompatible with democracy.”

Geoff. I’m 36 years old I can’t afford to wade through all this turgid bullshit. The world’s going down the toilet and there’s nothing we can do about it

You got that wrong. I actually asked you to say. ” I can’t afford to wade through all this turgid bullshit. It ‘s not whether we can get to a zero carbon economy. It’s can we get there before we fuck the world up.”