Are you evil or very evil? | Brussels Blog

Are you evil or very evil?

Are you evil, or very evil? 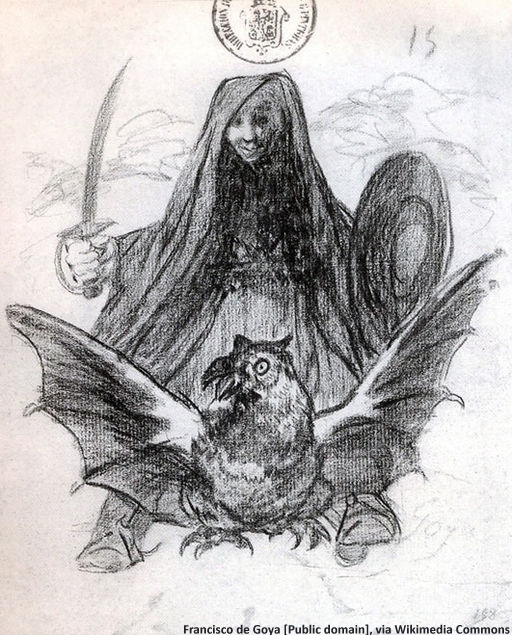 The War on Evil

The Carbon Budget Morality Index (CBMI) is an attempt to link the your effects on climate change with a score estimating your morality – so you can see how evil you are.

The science isn’t exact but it is reasonable to say:

Humanity can emit about 100 tonnes CO2e per person before a climate disaster. This will cause changes in the natural environment which would probably cause the deaths of billions of people and the extinction of many other species.

1. Killing billions of people is wrong.
2. Exterminating most other species is wrong.

Emitting 100 tonnes CO2e per person is a “shameful” amount – because a 2°C rise will certainly cause some very bad effects.  We can make a sample table linking carbon emissions with morality categories. 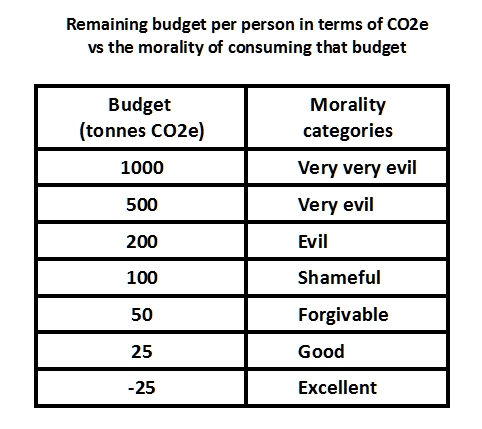 The last IPCC report, possibly optimistically, assumed that in roughly 50 years time the carbon emissions caused by humans could reach zero due to improved technologies and carbon reduction policies. So let us assume a 50 year period in which to use our remaining carbon budget. A 100 tonne budget would be used up in that fifty years at a steady rate of 2 tonnes CO2e per year.

However, it will become easier to reduce our carbon emissions as time goes by, the ‘shameful’ budget could be a start at 4 tonnes per year and reducing to zero over the 50 years, giving 100 tonnes in total. This  gives this table 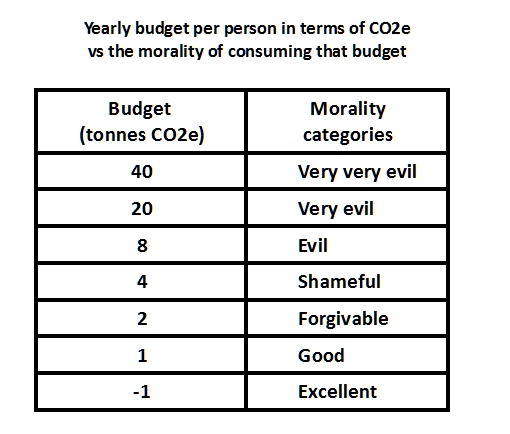 Will this cause trouble?

Mahlah and me got into a slanging match with a couple of tourists from the US in MacDonalds last week. (Environmental disclaimer: I had a cup of tea, a veggie burger and some fries – bad for my diabetes but not too bad for our planet.) There were no actual blows but McDonalds staff were hanging round nervously as Mahlah and tourists traded loud insults. The tourists walked to mutual haranging.

Although it wasn’t the flashpoint of the kerfuffle, I worried afterwards that what really got them going was that they overheard my comment that North Americans wouldn’t like this morality index because they have big cars and big carbon footprints and were nearer to VERY EVIL than EVIL. (In the UK we average midway between two.)

This has alerted me to the trouble this might cause me but that’s too paranoid because nobody much reads this blog. Do you?

Well, I reblogged on my facebook page (no one sees it except my sister !). We are all evil (nearly). It is time to acknowledge the situation for many, and act as if we have a huge debt. ! In fact 140 years of CO2 to remove… and certainly more because of the other gaz excess methane first and many others.