Amartya Sen on growth and climate 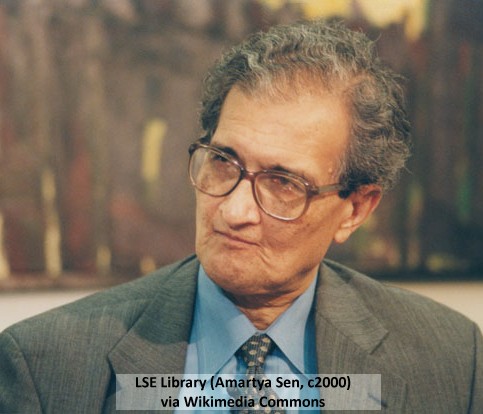 At a lecture in June at the York Festival of Ideas, the chair did her best to shut me up but to his credit Aramatya Sen, the Nobel laureate economist, let me continue – for a bit. I suspect that most of the audience were in awe of Professor Sen. Me too. However, he either misunderstood my question or dodged it. As I remember, I asked:

“Professor Sen, how can you believe that democracy works? Climate change is the most important issue for us now, we may be facing another mass extinction of life on Earth, yet hardly anybody here will even know what the ‘remaining carbon budget’ means. How can democracy work when there is such ignorance.”

Professor Sen answered “I don’t believe in budgetary approaches, taxation is much better.” I can’t remember exactly what happened next but I do remember shouting “You made a semantic shift” as a last (rather sad) throw.

The semantic shift was this: The IPCC’s “remaining carbon budget” is a concept referring to the physical capacity of the atmosphere to accept greenhouse gas emissions before we hit dangerous climate change. Sen’s reference to taxation rather than a “budgetary approach” referred to economic mechanisms. Was this semantic shift deliberate?

In his speech Sen argued for economic growth against austerity. He made similar points in an article for the New Statesman, The economic consequences of austerity,

“even if we want to reduce public debt quickly, austerity is not a particularly effective way of achieving this… For that, we need economic growth; and austerity, as Keynes noted, is essentially anti-growth.”

He told us not to be too frightened by public debt

“[When Britain] established the National Health Service, among other ways of expanding the public services … the ratio of debt to GDP was larger than 200 per cent, much more than twice what it has been at any point in recent years…”

“A decade later, when Harold Macmillan, as a buoyant new prime minister, told the British people in July 1957 that they had “never had it so good”, the size of government debt was more than 120 per cent of GDP – immensely higher than the ratio of roughly 70 per cent in 2010 when Gordon Brown was accused of mortgaging Britain’s future by profligacy.”

He related these issues to democracy

“It is no consolation that most of the governments in the eurozone that deployed the strategy of austerity lost office in public elections that followed. Democracy should be about preventing mistakes through participatory deliberations, rather than about making heads roll after mistakes have been made.”

This lack of media coverage leaves the public ignorant so little democratic participatory deliberation is possible.

Searching for Sen’s views on climate change we can find an article in New Republic that was originally titled “Environmentalists Obsess About Global Warming, Ignore Poor Countries” but now is headed “Global Warming Is Just One of Many Environmental Threats That Demand Our Attention”. Sen notes the important role that energy plats in world development but worries about the expansion of nuclear power. The article ends.

“Global warming, extremely important as it undoubtedly is, has to be seen as one part of a much larger picture of worrying threats as well as positive possibilities.”

Professor Sen obviously knows about climate change but perhaps he doesn’t know how bad it is. It’s not his worry about nuclear power that suggests this. Climate change makes the dangers of nuclear power rather worse with powerful storms and sea level rise – possibly even with more earthquakes and tsunamis. Although the sea defences have been improved around many nuclear power stations recently, they may not yet be good enough to withstand the uprated predictions for sea leve rise and mega storms that some scientists are suggesting.

What is worrying about Sen’s approach is his commitment to growth: economic growth in production and consumption cause growth in carbon emissions. OK, it is possible to de-carbonise economic activity but this cannot be achieved fast enough. I discussed this in Is green growth a fantasy?: Without unrealistic rates of de-carbonisation it is not possible to keep within the remaining carbon budget and also have economic growth.

The emphasis should not be on economic growth but on a redistribution of the wealth from capital assets. This  because if workers have to live on their wages and nothing else, there is a political pressure to promote growth so that employment and wage levels are high enough to avoid poverty.

However, economic growth is no longer an option.

It may be an enormous political battle to cut consumption and redistribute wealth but it is essential for the future of the world. That’s the truth.

If that’s not acceptable don’t blame me. Blame the truth.