We should listen to … Bob Johnson | Brussels Blog

We should listen to … Bob Johnson

May 2019:
See new postscript (at the end of course)
for a more recent video by Bob Johnson
This interesting cartoon from the Economist
on the state of Psychiatry is from a screenshot
of Dr Johnson’s talk. 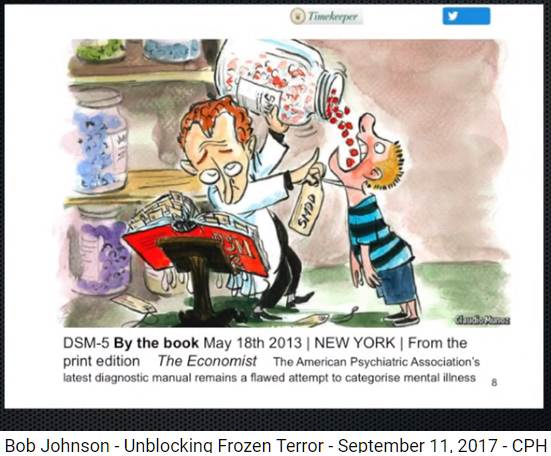 People we should listen to. No. 1

In a pub last week I had a short conversation with a former prison governor. He had been a governor of some high profile prisons. Obviously a caring person but not naive, he said long prison sentences were too long and short prison sentences were too short. If I caught his meaning correctly in this short conversation, long sentences make prisoners institutionalised, unable to cope with release and short sentences didn’t give the prison system time enough to do any good. Do judges talk to the prison service enough?

I asked the governor, if he knew the psychiatrist that quietened Parkhurst Prison for several years by getting the respect of prisoners and understanding the origins of their behaviour and enabling them to change. He immediately knew of Bob Johnson and acknowledged his work but he also said that no one else could repeat his success. The governor’s judgement – which I am reluctant to accept – has prompted me to start this series and make Bob Johnson the first.

I have attended some of Bob’s conferences and he is charismatic. My simplistic view of psychiatric interventions is that one discriptive dimension of methods ranges from “digging the bullet out” to “papering over the cracks”. Bob “digs bullets out”. But that’s enough of my amateur observations, go an find out more about Bob Johnson:

Book: Emotional Health: What Emotions Are and How They Cause Social and Mental Diseases

Book: Unsafe at Any Dose: Exposing Psychiatric Dogmas, So Minds Can Heal, Psychiatric Drugs Do More Harm Than Good

I’ve just remembered another comment by the governor – that Bob’s approach was one-to-one was very expensive whereas therapies like Cognitive Behavioural Therapies (CBT) can be carried out in groups and so cheaper.

The governor you talked to was following the party line – the ‘replacement’, the so called DSPD units (Dangerous and Severe Personality Disorder units) cost £500,000,000, and achieved nothing.  A Sainsbury Mental Health Centre Report condemned them – they never once asked me what I did …

CBT doesn’t go to the root – which needs cutting.

The report Bob references is Blurring the Boundaries, The convergence of mental health and criminal justice policy, legislation, systems and practice. It says

The DSPD programme is a ten year government pilot project that has cost nearly half a billion pounds. Positive outcomes have been very limited, and a host of ethical concerns have been raised since its creation in 1999…

The evidence suggests that it is now time for the DSPD programme to be phased out in favour of a prison-based personality disorder service. Reinvesting the DSPD Programme’s operational costs of £60 million per year, for example on mainstream prison-based interventions, would have a substantial impact on the current level of need in mainstream prisons, where up to 70% of prisoners have a form of personality disorder.

It is probably the issue of cost that is likely to determine the future for DSPD, as Maden (2007) suggests:

The architects of the DSPD service took some major strategic risks when they decided to go down a different road. They took those risks in a high-stakes game, and the most important risk may turn out to be financial. The average cost of DSPD treatment is more than £200,000 per patient per year (and nearly £300,000 in the high security hospitals), a sum that can buy a lot of risk management in other settings. People who work in the DSPD programmes already feel their practice is subject to close examination, but it may be worth nothing compared with the scrutiny heading their way from the accountants.

A final word from Bob:

It’s a curious thing, but the proof of C-Wing Parkhurst, was that no alarm bells rung for 3 years, down from 20 a year before I got into gear – but ‘proof’ counts for zilch when ideologies are questioned..

Dr Johnson has sent a copy of a letter he sent to the BBC.  It gives a perspective on the status of evidence in this field.

Though I invariably learn a thing or two from your excellent tv programmes, there are two points I’d like to make with respect to murder.

1) the Oak Ridge experiment was reproduced in our very own Parkhurst Prison 1991-6, when an effective therapy was implemented [see BBC Panorama, 3 March 1997]. The evidence for this is that no alarm bells were rung there for 3 years, a unique record world-wide for any maximum security prison wing, down from 20 a year previously. Lord Ramsbottom endorses my claim to have saved a dozen prison lives as a direct result of that work. When you next interview Robert Hare, please take a critic with you – he has much to answer for, though perhaps politics perverts perennially.

2) Sadly your optimism regarding ‘treating’ schizophrenia is not born out by the evidence. Harrow’s data shows that those taking psychotropics suffer 20 times more morbidity than those not – this after 20 years [see below]. Any other medical specialty would not tolerate a fraction of this gross inefficacy – please review the data, especially Mad in America, and the website of that name. Again, there is a terrible lesson still to be learnt, which tv could help.

Not sure this letter will get through, but I’m sending it off anyway. I’m having enormous success with traumagenic psychoses – “Goodbye psychosis – using anger to cut its roots,” but less so with established positions, understandably. 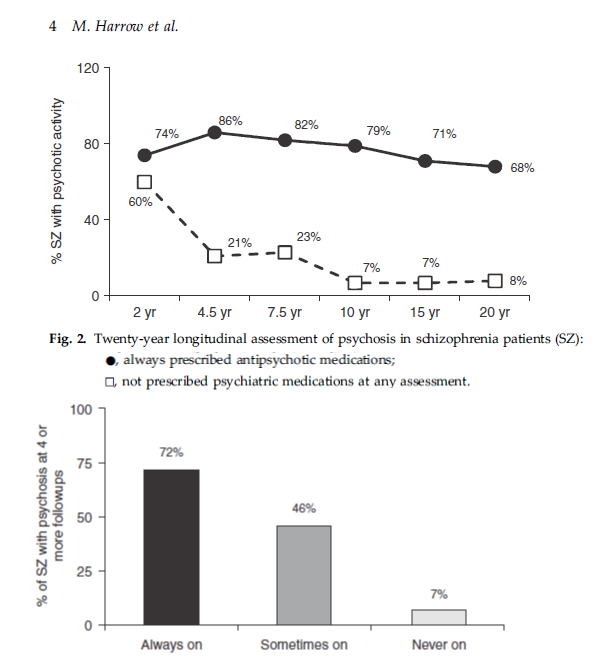 Consciousness: Using Clinical Evidence to Link Consciousness with its Twin Perils of Psychosis and Violence

Abstract:
CONSCIOUSNESS presents us with a challenging, disquieting, and somewhat contradictory mixture – parts of it are so simple they generally pass entirely without notice, while others are so far beyond our human capacity to understand, they seem permanently obscure. From the perspective of a working psychiatrist, it helps to separate these two aspects, so shedding light on this infinitely complex, yet vitally important topic.
This chapter therefore starts with its simplest characteristics – consciousness exists, but only when you are awake or unanaesthetised. It has a more straightforward relationship to ‘mind’ than is usually allowed – the two terms ‘mind’ and ‘consciousness’ overlap sufficiently for practical (psychiatric) purposes.

Next, comparing consciousness with the field of vision helps – the retina, after all, is neurologically speaking, an outgrowth of the very brain tissue itself. And the striking feature of eyesight is the focal point – a small area of high detail surrounded by blur, and the blurring increases the further you get from that point. Accordingly, it makes sense to acknowledge that the entrance channel to consciousness is also necessarily narrow – were it not, we would be overwhelmed too easily – “it all happened at once – so I lost track”.

Thirdly, there is no future in elucidating consciousness without tackling the challenge of ‘choice’, or Free Will. Parts of this aspect are indeed wrapped in permanent obscurity – like Richard Feynman said of Quantum Mechanics – if you think you understand it, you don’t. But as Samuel Johnson said in 1778, “All theory is against the Freedom of the Will; all experience for it” – time we paid more attention to the latter, it pays dividends to explore ‘experience’, here clinical experience, as fully as we can.

Convincing and inspirational presentation. Not sure about the quantum mechanics.