Planning permission is not a natural resource | Brussels Blog

Planning permission is not a natural resource

Planning permission is not a natural resource

An earlier article Planning gain in the York Local Plan calculated that in York a typical plot of agricultural land worth £600 has its value increased to £182,000 when planning permission to build a house on it is given: an increase in value of over 300 times.

Here it is argued that this increase is not correctly accounted for by saying ‘the land’ has increased in value but by saying the increase in value divided between the land and another entity, a planning permit. This is the right to have a building on the plot. This division is semantic but, as will be seen in future articles, it is important.

In economics, land is a natural resource with fixed supply. Planning permits are not. I suggest that the two should be considered separately. This means the ‘plot value’ is divided into the values of land and the value of ‘planning permits’.

Here, the value of land (‘land as a natural resource’) will be assumed to be the best guess at its ‘default use’: agriculture or natural land. In the context of this article, this is not an important choice.

Not much of the land of the UK is built on: 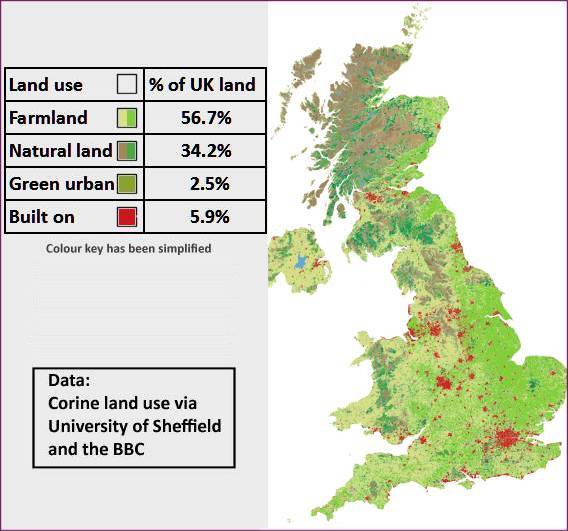 Figure 1: EU Corrine data via the University of Sheffield and summarised by the BBC.

The ONS calculate land to be over half the UK’s wealth: 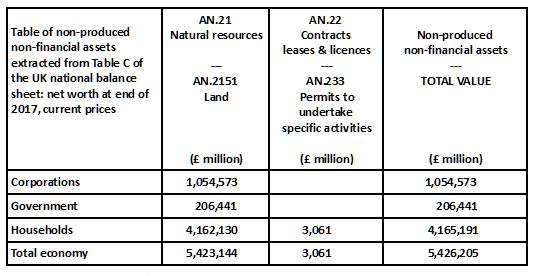 What type of land is most valuable?

The UK has a land area of 243,610 sq km (CIA World Factbook). Percentages for different uses are documented by The University of Sheffield and summarised by the BBC: 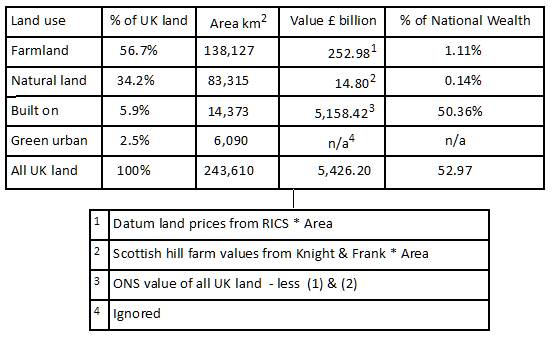 Table 2: Value of UK land by use

Although built up land covers a much smaller area than farm land or natural land the ONS valuation makes it very much the most valuable.

The value of buildings and other structures

Land that is ‘built on’ contains dwellings and other buildings such as shops, offices and factories. It also contains other structures such as roads, railways and bridges. The ONS has calculated their value:

Table 3: Value of buildings and other structures by ownership

The value of the ‘natural resource land’

In Table 1 , land is classified as ‘natural resources’. It is categorised in contrast to ‘permits to undertake specific activities’ under ‘non-produced, non-financial asset’. A System of National Accounts 2008 (United Nations) gives examples of permits, such as a taxi licence, giving the right to operate as a taxi, or a casino licence giving the right to operate a casino.

If a building were demolished, without the right of re-building, the value of the plot it stood on would be tiny. What makes the plot valuable is the right to have a building on that land. This right is a permit, a planning permit, similar to the operating licence to run a casino.

[Note on planning permits: The key point of this article is that the value of a plot of land can be divided into two separate components: its ‘value as a natural resource’ and the value of the right to use the plot in a particular way.

There are many different rights that might govern the use of a plot, either granted by law or historically assumed.

For the purposes of this article, the term planning permit will refer to the right to have a building or ‘other structure’ on the plot. In most cases, the value of the planning permit greatly exceeds a plot’s ‘value as a natural resource’.]

Table 4 estimates the value of ‘land as a natural resource’, excluding the value of planning permits. This only affects ‘built on’ land. An assumption has been made that its value per hectare is the same as farmland. 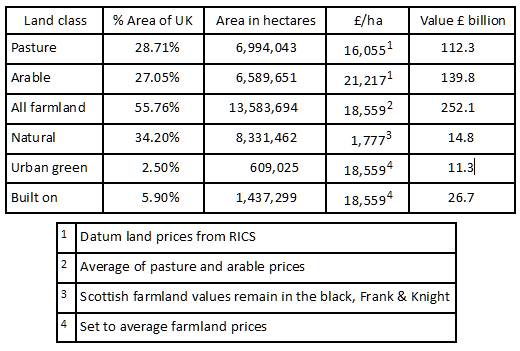 Table 4: Total value of ‘land as a natural resource’. The total is £305 billion.

This means reducing the values in column AN.2151, ‘Land’ in Table 1 to the value of ‘land as a natural resource’ , estimated in Table 4, and reassigning the excess value to column AN.233, Permits to undertake specific activities.

Planning permits should not be counted under AN.21, Natural resources

In order to update Table 1, assignments to ownership category are needed. Table 5 has been used for this but several large assumptions have been made about the proportions of land owned by corporate, government and households. Table 5 should be regarded as illustrative.

Table 5: An estimate of the ownership of land by land value

Clearly issuing a planning permit does not create any natural resource. Table 1a  is the corrected version of Table1.

Table 1a: A corrected extract of Table C, The UK National balance sheet 2018

A planning permit is not a natural resource. It is a right controlled by government legislation. ONS accounting should be changed.

Further analysis will be in a following article.