Conclusion: The cumulative effects of global warming are not being taken seriously enough. 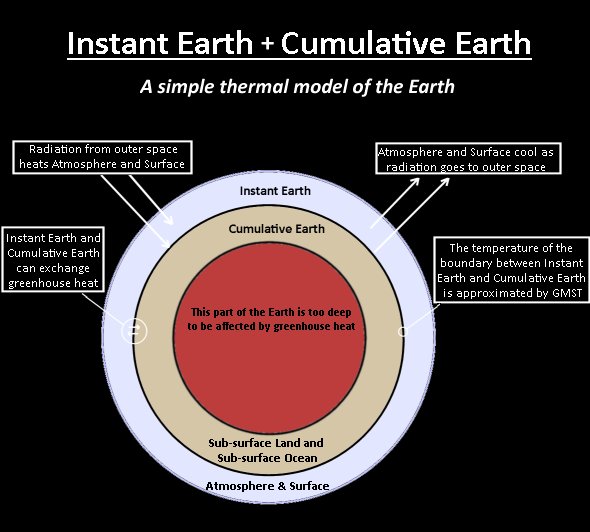 All the energy that enters or leaves the Earth does so via radiation at the top of the atmosphere. Before the industrial revolution, e.g. 1750, incoming radiation was balanced by outgoing radiation. Since then, triggered by emissions of greenhouse gases, less energy is leaving the Earth than entering, causing the Earth’s Energy Imbalance (EEI), which has been described as “the most fundamental metric defining the status of global climate change”.

Here, the extra energy stored in the Earth since 1750 will be referred to as ‘greenhouse heat’ as it is stored as heat (including latent heat from melted ice).

A simplified thermal model of the Earth

Here is the simplified thermal model of the Earth used in this note to explore climate policies. This model divides the Earth in two parts: Instant Earth and Cumulative Earth:

The usual measure of the Earth’s surface temperature is called Global Mean Surface Temperature (GMST). To get a value for GMST at a specific time, temperatures from measuring stations are combined to form average values. There have been different schemes for averaging, complicated by the uneven geographical spread of the stations.

In the simplified thermal model, GMST can be identified as the temperature of the lowest part of Instant Earth, so it governs the rate of transfer of heat to Cumulative Earth. The greenhouse heat in Cumulative Earth is largely Ocean Heat Content. GMST is controlled by the concentrations of greenhouse gases in the atmosphere which create the Earth’s Energy Imbalance. In my thermal model the control is instantaneous.

The climate effects in Instant Earth include heat waves, floods, droughts and storms. The most recognised climate effect of the heat in Cumulative Earth, is sea level rise. Cumulative warming of the ocean also plays an important part in melting sea ice and the edges of land-based ice masses as they extend into the ocean.

A less recognised Cumulative Effect is the intensification of tropical storms to become super hurricanes and super typhoons (2011), caused by the cumulative increase in ocean heat content. More recognition is coming as shown in Ocean heat as ‘fuel’ for hurricanes (2018):

Another less recognised Cumulative Effect is the warming of sub-surface permafrost in tundra and ocean floors. Some believe these may be the source of serious climate feedbacks, and important feedbacks are badly represented in climate models.

Judging from social media, mainstream media and scientific publications, Instant Effects get much more attention than Cumulative Effects. The most recognised Cumulative Effect is sea level rise, which is slow moving and less newsworthy than hurricanes or wildfires.

In the scientific literature, the concern for instant effects is concentrated on a concern for peak GMST. This excludes or downplays effects that happen outside the time of the peak, which are below the peak but experienced over an extended period.

As well as the effects of greenhouse heat in Cumulative Earth there are the ‘instant effects’ that are properties of Instant Earth, which take place an extended period. E.g.

Using one moment in time, the time when GMST reaches a peak value, to frame climate policy ignores cumulative damage and the dangers of a prolonged period of increased Earth’s Energy Imbalance.

The Paris Agreement has framed policy on climate change based on Instant Effects at a moment in time by choosing a limit to GMST to a maximum value. The time is the time of peak temperature.

The target of the Paris Agreement is that global temperature should not rise past a certain limit, during this century. It says:

The Paris Agreement central aim is to strengthen the global response to the threat of climate change by keeping a global temperature rise this century well below 2 degrees Celsius above pre-industrial levels and to pursue efforts to limit the temperature increase even further to 1.5 degrees Celsius.

Thus, there are these three uncertainties in the Paris Agreement:

There is another aspect of the Paris Agreement that is unclear. This concerns how the ‘Paris limit’ might be exceeded. For the following example, assume that ‘well below 2 degrees Celsius’ means the more specific ‘below 1.75 degrees Celsius’. Consider these two scenarios:

Scenario 1 Earth’s Energy Imbalance keeps GMST at 1.7C for the rest of the century.

Both scenarios will be compliant with the Paris Agreement, but the differences are:

1 With Scenario 1, GMST is significantly higher than Scenario 2, for the years 2021 to 2090. For these years the worse effects associated with Instant Earth will occur (droughts, floods, heat waves & etc).

2 With Scenario 1, the heat in the Cumulative Earth is much higher.

It should be clear that scenario 2 is preferable to scenario 1. This has important implications for policies on short term climate pollutants, such as methane or CO2 when Carbon Capture and Storage is used (see below).

The 50% of CO2 emissions that accumulates in the in the atmosphere limits the energy that is leaving the Earth and increases the Earth’s Energy Imbalance. This, in turn, controls the Earth’s surface temperature and the Instant Effects of climate change.

Other greenhouse gases affect the Earth’s Energy Imbalance. The most important of the other greenhouse gases are methane (CH4), F-gases and nitrous oxide (N20) (EPA: Overview of Greenhouse Gasses). At the present, the warming caused by methane is 58% of CO2’s warming. F-gases are 11% and N20 is 10% (Real Climate: The evolution of radiative forcing bar-charts).

However, methane does not accumulate in the same way. When methane is emitted, it stays in the atmosphere for a decade or so before being removed by natural chemical reactions. After 9.1 years half of it has gone [9]. This means atmospheric concentration of methane falls quickly unless replenished.

The decay of methane causes a fall in the Earth’s Energy Imbalance causing a decrease in the Earth’s surface temperature (GMST). This decrease would happen almost as quickly as methane decays, but currently the decay is more than offset by increased emissions of methane.

Some argue for a policy of sharply reducing methane emissions because it would have an immediate effect on reducing Earth’s Energy Imbalance and Earth’s surface temperature. Shindell et al. argue this in Simultaneously Mitigating Near-Term Climate Change and Improving Human Health and Food Security.

“We don’t actually need to give up eating meat to stabilise global temperatures,” says Professor Myles Allen who led the study (meat production is a major source of methane). “We just need to stop increasing our collective meat consumption.”

Of course, a lower amount meat consumption would give stability at a lower temperature.

Professor Allen’s views have given this impression: “Don’t worry much about short term climate heating from methane until peak temperature is close because the extra surface heating will have dissipated before the peak.”

This seemed to be the meaning that Professor David MacKay took. This is an extract from notes I made from a conversation I had with him in 2009:

3) By the time peak temperature occurs any methane released now will have been removed from the atmosphere by natural processes so it will not affect global warming at the all-important peak.

I confirmed these notes with Professor MacKay. At that time, he was Chief Scientist at the Department of Energy ad Climate Change. Put more crudely this view appears to be: “Don’t worry about methane emissions for the time being.”

This view highlights the damage from climate change at one moment in  time, the time of peak temperature. This is misleading: It downplays the cumulative effects of sea-level rise and accumulating feedbacks. It also downplays the continuing disaster of the effects on economies, human lives and nature.

Correctly timed this may help to keep GMST within a specific limit but GMST will be raised during the time between emission and extraction, causing the cumulative problems described above. To account for climates feedbacks more CO2 must be extracted than emitted.

A policy which simply limits Earth’s surface temperature at a specific time has imited use. It can hide serious issues.

The paper Revised estimates of ocean-atmosphere CO2 flux are consistent with ocean carbon inventory by Watson et al. provides increased estimates for the the size of the CO2 sink in the Earth’s oceans. The increase seems enough to account for the carbon imbalance reported in the Global Carbon Project.

The paper says this about the ocean surface layer:

Furthermore, the MBL [ mass boundary layer] is embedded within the ocean’s thermal skin, the uppermost ~1000 µm which is cooler than the underlying water because the ocean surface is a net emitter of heat, both via latent heat and longwave radiative fluxes, to the atmosphere.

1000 um is one millimetre supporting the idea that the “ocean’s thermal skin” is a shallow part of the surface of the ocean, and is part of “Instant Earth” as described above.