Keeping warm on a budget

One person might come in from work to their flat on a cold day, put the kettle on and sit in an armchair in front of the television. She does not turn on the 26 Kw gas central heating, which has an “energy-saving” gas condensing boiler, newly installed by her housing association because this takes an hour or so to heat the flat. Instead she switches on a 600 watt electric halogen heater, which is pointing at the armchair. When she has warmed up a bit, she goes to the colder kitchen to make a cup of tea and get something to eat and goes back to the warm armchair.

Another person might have a dispute with his electricity supplier and have no power in his flat. He might stay in a warm friendly gas heated pub then go home and get into bed. He remains reasonably healthy by eating raw food at home.

Other people might live in caravans using bottled gas for heating. The heated main room in a caravan may be one tenth of the volume of a typical house and have a quarter of the surface area. If the caravan (or park home) were insulated to a decent standard, heating load could be a quarter of that of the house and have a much faster heating response: turn on the heat for almost instant warmth. The caravan dwellers may also be lucky and have windows that look out onto pleasant green wooded surroundings. As one caravan dweller put it:

“There’s nothing more life affirming than waking up surrounded by nature- woods, birds, the occasional deer and falling to sleep to the sound of hooting owls. The space and the fresh air put a bounce in your step!”

The carbon emissions for keeping flat, pub and caravan dweller warm are a small fraction of that necessary to heat a dwelling to the “fuel poverty” level.

These examples are not typical. They do not have children living with them and one could afford to stay in the pub for the evening – trying to drink slowly, of course. However three messages shout out. First, people find ways to keep warm by creating micro-climates in their homes (e.g. halogen heater and armchair). Second, the slightly more affluent can enjoy the communual warmth of the pub. Third, living in a small space can be economically warm and need not feel horrible and cramped.

And importantly they all have small carbon footprints. 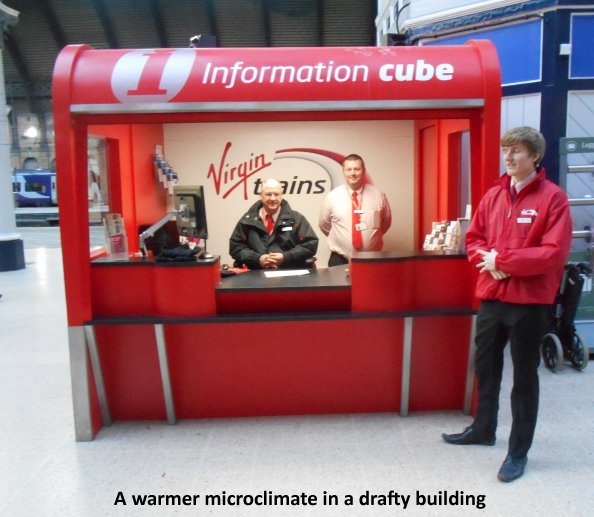 Having spaces in buildings that have different environmental characteristics allows movement from one to another for a change. For example, people can move to a cooler room when they feel a bit “stuffy” or to a warmer place when they feel chilly.

Current thinking on fuel poverty, which mostly concerns heating, is to aim at keeping hundreds of cubic metres of dwelling warm to ensure that people, who occupy about one cubic meter are kept warm. It is time we looked at the interior micro-climates to stop this waste. A consequence of the Government’s conventional “fuel poverty” approach can lead to odd anomalies: Residents of quite affluent areas can find it difficult to keep their whole house at a standard temperature because their houses are large (See for example, Our fuel-poor Queen?)

A modern version of the Inglenook

I live in quite a large old flat having sold my house recently. I mostly live in one large room – just occasionally going upstairs. This room has three large windows. These are hardly draught proof but they do allow a good amount of light in – and for some part of the day sunlight. The landlords could double-glaze the windows but that would mean less air-changes, more difficulty in opening windows and in the case of this old building significant expense – it would be a custom job and I would have little confidence that it could be carried out to my satisfaction.

One possibility for an environmentally distinct space would be something with the same shape as a bus shelter – on the opposite wall facing the windows – with responsive heating built in. I can visualise it in my big room being a bit like a modern redesign of an inglenook but responsive to the presence of the occupants. Wikipedia describes an inglenook like this:

The hearth was used for cooking, and its enclosing alcove became a natural place for people seeking warmth to gather. With changes in building design, kitchens became separate rooms, while inglenooks were retained in the living space as intimate warming places, subsidiary spaces within larger rooms.

Using physical barriers to change the local environment within buildings is a good starting point for the research but rigid fixed structures – even with adaptive cooling or heating – may be extended by dynamically adaptable barriers like, but not restricted to, self-closing doors or barriers.

Standard parameters of the physical determinants of comfort within buildings include temperature, humidity and lighting levels. Other parameters such as the concentrations of VOCs (volatile organic compounds) may be added. The existence of sick building syndrome shows there is incomplete understanding of comfort in buildings, especially in modern ones. However, these problems are not new. For instance I remember moving from an old school building to a building where classrooms were designed to the 2% daylight factor principle. This meant on certain days it was impossible to read the page on the desk because it was swamped by blinding sunlight. It was much less visually comfortable than the old school that would have failed the 2% test.

Other comfort-related parameters are rarely used e.g. a gentle draft affects the perception (and reality) of a room temperature which is too high. There are other factors such as visual or acoustic properties that have a real effects on comfort, which are difficult to predict at the design stage.

The retrofit of old buildings for the comfort of occupiers is a design issue and it is too complex to be put into a methodology based on simple measures like temperature or air changes. However, before any design guides can be written, research is necessary. I think what is needed are practical examples (e.g. the modern inglenook) that can act as simplified models on which to base design principles and practice.

We have new ground to cover. The old approaches just are not sufficient. Perhaps methodology of the Marshmallow Challenge should be applied: Build some simple prototypes and test – but we should also look at what people on restricted budgets do.